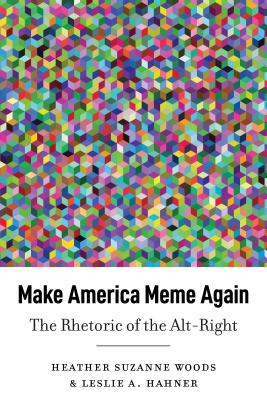 This is book number 45 in the Frontiers in Political Communication series.

As demonstrated by the 2016 presidential election, memes have become the suasory tactic par excellence for the promotional and recruitment efforts of the Alt-right. Memes are not simply humorous shorthands or pithy assertions, but play a significant role in the machinations of politics and how the public comes to understand and respond to their government and compatriots. Using the tools of rhetorical criticism, the authors detail how memetic persuasion operates, with a particular focus on the 2016 election of Donald J. Trump. Make America Meme Again reveals the rhetorical principles used to design Alt-right memes, outlining the myriad ways memes lure mainstream audiences to a number of extremist claims. In particular, this book argues that Alt-right memes impact the culture of digital boards and broader public culture by stultifying discourse, thereby shaping how publics congeal. The authors demonstrate that memes are a mechanism that proliferate white nationalism and exclusionary politics by spreading algorithmically through network cultures in ways that are often difficult to discern. Alt-right memes thus present a significant threat to democratic praxis, one that can begin to be combatted through a rigorous rhetorical analysis of their power and influence. Make America Meme Again illuminates the function of networked persuasion for scholars and practitioners of rhetoric, media, and communication; political theorists; digital humanists; and anyone who has ever seen, crafted, or proliferated a meme.

Heather Suzanne Woods is Assistant Professor of Rhetoric and Technology at Kansas State University. Her research centers on rhetorics of futurity and innovation. She is published in Critical Studies in Media Communication, Feminist Media Studies, Present Tense, and Teaching Media Quarterly. Leslie A. Hahner is Associate Professor of Communication at Baylor University. Her work explores how the visual shapes public culture. She is the author of To Become an American. Her work appears in the Quarterly Journal of Speech, Communication and Critical/Cultural Studies, and other outlets.