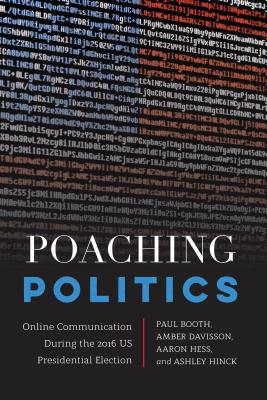 This is book number 40 in the Frontiers in Political Communication series.

The 2016 US election was ugly, divisive, maddening, and influential. In this provocative new book, Paul Booth, Amber Davisson, Aaron Hess, and Ashley Hinck explore the effect that everyday people had on the political process. From viewing candidates as celebrities, to finding fan communities within the political spectrum, to joining others online in spreading (mis)information, the true influence in 2016 was the online participant.

Poaching Politics brings together research and scholars from media studies, political communication, and rhetoric to provide an interdisciplinary perspective on the role of participatory cultures in shaping the 2016 US presidential election. Poaching Politics heralds a new way of creating and understanding shifts in the nature of political communication in the digital age.

Paul Booth is Associate Professor at DePaul University. He is the author/editor of 10 books, including Digital Fandom 2.0 (Peter Lang 2016), Game Play (2015), and the Companion to Media Fandom and Fan Studies (2018). Amber Davisson is Associate Professor of Communication at Keene State College. She is the author of Lady Gaga and the Remaking of Celebrity Culture (2013) and the co-editor of Controversies in Digital Ethics (2016) and Theorizing Digital Rhetoric (2018). Her interdisciplinary scholarship on identity, politics, and digital technology has appeared in several journals. Aaron Hess is Associate Professor of Rhetoric and Communication at Arizona State University. He is the co-author of Participatory Critical Rhetoric (2015) and the co-editor of Theorizing Digital Rhetoric (2018). His research trajectory follows two primary avenues: the active participatory elements of rhetorical advocacy and the exploration of digital contexts for rhetorical expression. Ashley Hinck is Assistant Professor at Xavier University. Her work has appeared in a number of scholarly journals. Her book, Politics for the Love of Fandom: Fan-Based Citizenship in a Digital World, will be published in Spring 2019.