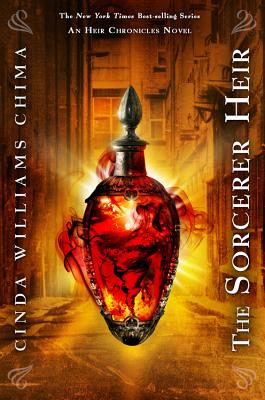 This is book number 5 in the The Heir Chronicles series.

The delicate peace between Wizards and the underguilds holds by the thinnest of threads, but powerful forces inside and outside the guilds threaten to sever it completely, and Emma and Jonah are at the center of it all. Brought together by their shared history, mutual attraction, and a belief in the magic of music, they may be torn apart by new wounds and old betrayals. As they struggle to rebuild their trust in one another, Emma and Jonah must also clear their names as the prime suspects in a series of vicious murders. The answers they need appear to lie buried in the tragedies of the past—but can they survive long enough to unearth them?

Old friends and foes return as new threats arise in this stunning and revelatory conclusion to the beloved Heir Chronicles series.
New York Times and USA Today bestselling author Cinda Williams Chima grew up with talking animals and kick-butt Barbies. She began writing poetry and stories in third grade and novels in junior high school. These days she writes fantasy fiction for teens of all ages. Her Heir Chronicles contemporary fantasy series includes The Warrior Heir, The Wizard Heir, The Dragon Heir, The Enchanter Heir, and The Sorcerer Heir.

Her high fantasy Seven Realms series launched with The Demon King, followed by The Exiled Queen, The Gray Wolf Throne, and The Crimson Crown; she is also the author of the Shattered Realms series, including Flamecaster, Shadowcaster, Stormcaster, and Deathcaster, among other works. She lives in Ohio with her family, and invites you to visit her online at cindachima.com.
"The chords...binding and sustaining this well-paced narrative are the authentic relationships between characters that are deeply engaging to readers. As Chima wraps up an arc within the Heir Chronicles series, plot knots are neatly resolved and lovers united, and yet there is a hint that still more may come."—Booklist