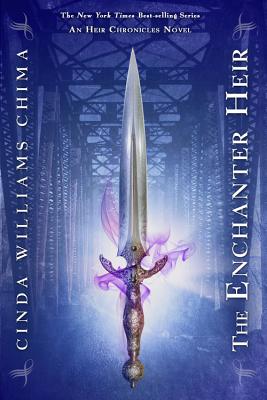 This is book number 4 in the The Heir Chronicles series.

They called it the Thorn Hill Massacre—the brutal attack on a once-thriving Weir community. Though Jonah Kinlock lived through it, he did not emerge unscathed. Like the other survivors, Jonah possesses unique magical gifts that set him apart from members of the mainline guilds. At seventeen, he has become the deadliest assassin in Nightshade, a network that hunts the undead.

Emma Claire Greenwood grew up worlds away, raised by a grandfather who taught her music rather than magic. An unschooled wild child, she runs the streets until the night she finds her grandfather dying, gripping a note warning Emma that she might be in danger. The clue he leaves behind leads Emma into Jonah's life—and a shared legacy of secrets and lingering questions: Was Thorn Hill really a peaceful commune? Or was it, as the Wizard Guild claims, a hotbed of underguild terrorists?

As members of the mainline guilds start turning up dead, the Wizards blame Nightshade, and it's up to Jonah and Emma work to uncover the truth...before whoever planned the Thorn Hill Massacre strikes again.
New York Times and USA Today bestselling author Cinda Williams Chima grew up with talking animals and kick-butt Barbies. She began writing poetry and stories in third grade and novels in junior high school. These days she writes fantasy fiction for teens of all ages. Her Heir Chronicles contemporary fantasy series includes The Warrior Heir, The Wizard Heir, The Dragon Heir, The Enchanter Heir, and The Sorcerer Heir.

Her high fantasy Seven Realms series launched with The Demon King, followed by The Exiled Queen, The Gray Wolf Throne, and The Crimson Crown; she is also the author of the Shattered Realms series, including Flamecaster, Shadowcaster, Stormcaster, and Deathcaster, among other works. She lives in Ohio with her family, and invites you to visit her online at cindachima.com.
"A smoldering story soaked in tears, sweat and blood, constantly threatening to blaze into an inferno. Spellbinding."—Kirkus Reviews

"The fourth installment to Chima’s “Heir Chronicles”....Scattered with musical references throughout, the book also tackles serious themes of disability and discrimination. The cliff-hanger ending will leave readers restless for more."—School Library Journal

"Teens will be more than relieved when they can finally put their hands on this next, long-awaited entry in the Heir Chronicles series....The fighting and weaponry will have strong appeal for boys, while the musical references will appeal to any teen interested in crafting their own music, lyrics, or poetry. The surprise ending, with plenty of loose threads left hanging, will intrigue and frustrate fans who now must begin to wait all over again."—VOYA

"Intriguing plot and subplot teasers abound, and the book ends in a cliffhanger that will have readers roaring for the next entry. Chima continues to excel at building tension and populating her well-told tales with new and returning characters we want to know better."—Booklist