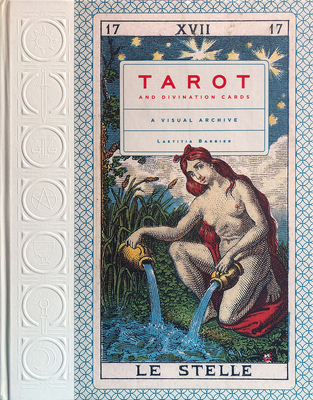 
On Our Shelves Now
A stunning visual history of tarot

Used for self-exploration or divination, tarot has, for more than 500 years, been the most popular and accessible of all esoteric tools, looming large in today’s mainstream culture. Why? Because the cards are inexpensive and easy to carry—a perfect traveling companion and, therefore, an invitation to a journey inward and out.

Humans are drawn to playing games and feel driven to find meaning in the chaos of paradoxical signs. The vivid iconography of the “Arcanas” speak to us like no other language, moving us to the core, weaving through each card a universal story, a metaphorical pathway of transformation.

This 400-page book presents—for the first time—a close look at 500 years of figurative card decks created or used for fortune telling, divinations, and oracle purposes, and explores, one card at the time, their iconographic roots at the crossroads of the medieval imaginarium, Western esoteric wisdom, folklore, and also contemporary art and pop culture. With hundreds of images drawn from more than 100 decks, rarely published and often forgotten in library archives, this book offers the first visual history of tarot.
French-born Laetitia Barbier is an independent scholar and curator, as well as a professional tarot reader and teacher. She earned a bachelor’s degree in art history at the Sorbonne in Paris. Barbier has worked with Morbid Anatomy as the programming director and head librarian since 2012. Her work has been featured in Atlas Obscura, Vice, and in Death: A Graveside Companion (Thames & Hudson). Barbier shares her love for tarot and obscure fortune telling decks and techniques through her Instagram account, where she has nearly 40,000 followers.