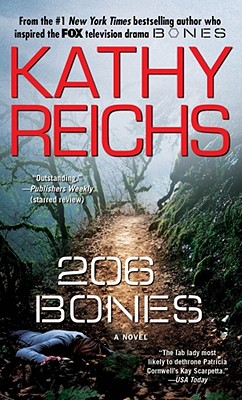 This is book number 12 in the A Temperance Brennan Novel series.

There are 206 bones in the human body. Forensic anthropologists know them intimately, can use them to reconstruct every kind of violent end. When Tempe finds herself regaining consciousness in some kind of very small, very dark, very cold enclosed space—bound, hands to feet—Tempe begins slowly to reconstruct...

Tempe and Lieutenant Ryan had accompanied the recently discovered remains of a missing heiress from Montreal to the Chicago morgue. Suddenly, Tempe was accused of mishandling the autopsy—and the case. Back in Montreal, the corpse of a second elderly woman was found in the woods, and then a third. Seamlessly weaving between Tempe’s present-tense terror as she’s held captive and her memory of the cases of these murdered women, Reichs reveals the incredible devastation that would occur if a forensic colleague sabotaged work in the lab. The chemistry between Tempe and Ryan intensifies as this complex, riveting tale unfolds, proving once again, that Reichs is the dominant talent in forensic mystery writing.
Kathy Reichs’s first novel Déjà Dead, published in 1997, won the Ellis Award for Best First Novel and was an international bestseller. She has written twenty-two novels featuring forensic anthropologist Temperance Brennan. Kathy was also a producer of Fox Television’s longest running scripted drama, Bones, which was based on her work and her novels. One of very few forensic anthropologists certified by the American Board of Forensic Anthropology, Kathy divides her time between Charlotte, North Carolina, and Montreal, Québec. Visit her at KathyReichs.com or follow her on Twitter @KathyReichs.