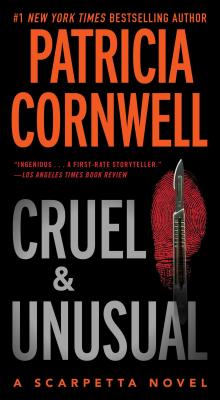 This is book number 4 in the Kay Scarpetta series.

“Killing me won’t kill the beast” are the last words of rapist-murderer Ronnie Joe Waddell, written four days before his execution. But they can’t explain how medical examiner Dr. Kay Scarpetta finds Waddell’s fingerprints on another crime scene—after she’d performed his autopsy. If this is some sort of game, Scarpetta seems to be the target. And if the next victim is someone she knows, the punishment will be cruel and unusual...
Patricia Cornwell is recognized as one of the world’s top bestselling crime authors with novels translated into thirty-six languages in more than 120 countries. Her novels have won numerous prestigious awards including the Edgar, the Creasey, the Anthony, the Macavity, and the Prix du Roman d’Aventure. Beyond the Scarpetta series, Cornwell has written a definitive book about Jack the Ripper, a biography, and two more fiction series among others. Cornwell, a licensed helicopter pilot and scuba diver, actively researches the cutting-edge forensic technologies that inform her work. She was born in Miami, grew up in Montreat, NC, and now lives and works in Boston. Find out more at PatriciaCornwell.com, at Facebook.com/Patricia.Cornwell, on Twitter: @1pcornwell, and on Instagram: @1pcornwell.

"Engrossing...an extremely effective novel of suspense, in all its varieties...Corwell's sleuth is the best in the business."
-- Entertainment Weekly