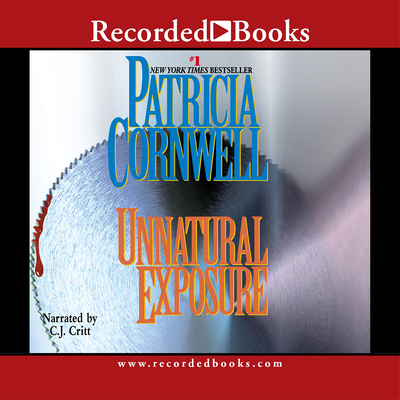 By Patricia Cornwell, C. J. Critt (Narrated by)
Out of Print

This is book number 8 in the Kay Scarpetta series.

Filled with tension and continual surprises, Unnatural Exposure is a thrilling chapter in Virginia Chief Medical Examiner Kay Scarpetta's life--and a triumph for #1 New York Times best-selling author Patricia Cornwell. The body of an elderly woman is found dismembered in a Virginia landfill. Scarpetta initially believes the clues mirror that of a serial killer she's tracked before, but upon further investigation, she discovers puzzling pox-like erruptions on the woman's body that, perhaps, point in another direction. When the killer contacts her via e-mail, Scarpetta enlists the aid of her computer-savvy niece, Lucy, to help track this monster through cyberspace. Learning that the Virginia victim was exposed to a high-tech virus that might unleash an epidemic, Scarpetta realizes she's dealing with a sophisticated mind. Her investigation leads her from the government's biological defense facility in Utah, to Atlanta's Center for Disease Control--and eventually to quarrantine, when it is discovered that Scarpetta has been exposed to this fatal virus. Along the way, she's forced to deal with the unscrupulous ambitions of a slick FBI agent, Lucy's problems, and her own turbulent feelings for Agent Wesley Benton.