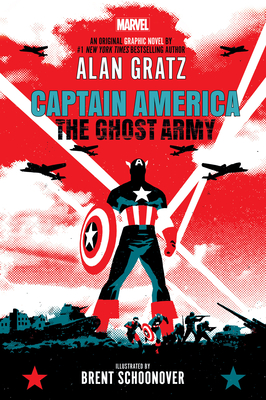 Alan Gratz will sign and personalize books ordered from Malaprop's! For personalization, use the order comments field to tell Alan to whom the book should be signed, e.g. "to Steve."

In this thrilling historical adventure set during World War II, Steve Rogers (AKA Captain America) and his young sidekick, Bucky Barnes, encounter threat like none they've ever seen -- a Ghost Army. The dead of this war and wars past are coming back to life, impervious to bullets, flames, or anything else the Allies can throw at them. The armies rise from the ground in the night and seem to disappear without a trace.

How can Cap and Buck fight something that's already dead? And just what does the mysterious Baron Mordo—sitting in his castle atop nearby Wundagore Mountain—have to do with this?

Award-winning, #1 New York Times bestselling author Alan Gratz merges the worlds of historical fiction and super hero comics in this one-of-a-kind graphic novel that is sure to be met with major enthusiasm from fans of all ages.

Alan Gratz is the #1 New York Times bestselling author of several highly acclaimed books for young readers, including Ground Zero, Allies, Grenade,Refugee, Projekt 1065, Prisoner B-3087, and Code of Honor. Alan lives in North Carolina with his wife and daughter. Look for him online at alangratz.com.

Brent Schoonover is a Midwestern-born illustrator who works in the fields of comic books and commercial art, having done projects for clients such as Target, Continental Airlines, Mayo Clinic, and the NFL. In the field of comics, Brent has worked on several creator-owned projects like Devil’s Highway from AWA, as well as on well-known characters such as Batman and Superman at DC Comics, and X-Men, Ant-Man, Captain Marvel, and Black Widow at Marvel Comics. He currently lives in Minneapolis with his wife, Nicole; two daughters, Millie and Josie; and their bulldog, Agatha.

It’s hard to craft a superhero epic specifically for middle-grade readers that also honors an oldfashioned adventure mentality, but Gratz locks in reader interest . . . Schoonover’s art has old-fashioned charm as well, like an adventure movie with solid, practical effects rather than numbingly sleek digital ones, lending a visual assist to the story’s more human scope. This is not to suggest, of course, that either art or story skimps on the raucous action, nor that there aren't plenty of Marvel Easter eggs placed throughout the battlefield for eager aficionados to pick out."