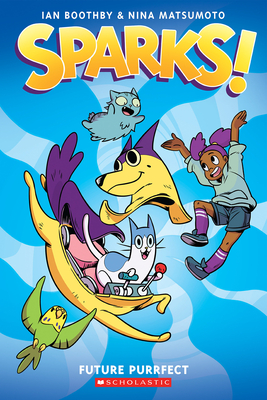 Charlie and August go on vacation, but trouble always finds them!Charlie and August, the kitty duo who control the incredible Sparks costume, are exhausted. It's hard work saving people all the time! So what better way to relax than to get away to a beautiful tropical island? But when weird things start to happen and they discover that the island holds a surprising secret, they're blasted off on their craziest adventure ever. And this time they have to save themselves!
Nina Matsumoto is a Japanese Canadian who grew up drawing mostly animals, then mostly people, then back to animals again for this book. She penciled Simpsons Comics for 10 years, and currently designs video game merchandise and apparel for Fangamer. She created her own English manga series, Yokaiden, and drew The Last Airbender Prequel: Zuko's Story. In 2009, she won an Eisner Award with Ian Boothby, and they have been collaborating ever since. She resides in Vancouver, British Columbia, and loves watching the crows fly to their roost every evening. Visit her online at spacecoyote.com.
Ian Boothby has been writing comedy for TV and radio since he was 13 and making his own comics since he was 16. Ian has written comic books for The Simpsons, Futurama, Mars Attacks, Scooby-Doo, The Powerpuff Girls, and The Flash. Ian has also won an Eisner Award for Best Short Story along with the artist Nina Matsumoto. He lives in Vancouver, British Columbia.

"Tightly spaced panels and frenetic motion lines keep the tension high and the pace quick, and the plethora of onomatopoeia give a dramatic and amusing comic-book feel. Back off, Lassie and Rin Tin Tin; Sparks is on the scene and ready for action." -- Bulletin of the Center for Children's Books

"It's an off-the-wall and very funny adventure with an entertaining odd-couple friendship at its core." -- Publishers Weekly

"Cat and dog lovers alike will laugh their way to the end of this offering... Recommended for all children's comics collections." -- School Library Journal