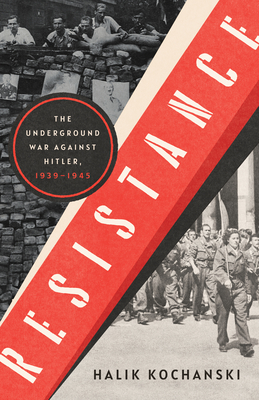 “This is the most comprehensive and best account of resistance I have read. It addresses the story with scholarly objectivity and an absolute lack of sentimentality. So much romantic twaddle is still published . . . it is marvelous to read a study of such breadth and depth, which reaches balanced judgments.”

Resistance is the first book of its kind: a monumental history that finally integrates the many resistance movements against Nazi hegemony in Europe into a single, sweeping narrative of defiance.

“To resist, therefore. But how, when and where? There were no laws, no guidelines, no precedents to show the way . . .” —Dutch resister Herman Friedhoff

In every country that fell to the Third Reich during the Second World War, from France in the west to parts of the Soviet Union in the east, a resistance movement against Nazi domination emerged. And every country that endured occupation created its own fiercely nationalist account of the role of homegrown resistance in its eventual liberation. Halik Kochanski’s panoramic, prodigiously researched work is a monumental achievement: the first book to strip these disparate national histories of myth and nostalgia and to integrate them into a definitive chronicle of the underground war against the Nazis.

Bringing to light many powerful and often little-known stories, Resistance shows how small bands of individuals took actions that could lead not merely to their own deaths, but to the liquidation of their families and their entire communities. As Kochanski demonstrates, most who joined up were not supermen and superwomen, but ordinary people drawn from all walks of life who would not have been expected—least of all by themselves—to become heroes of any kind. Kochanski also covers the sheer variety of resistance activities, from the clandestine press, assistance to Allied servicemen evading capture, and the provision of intelligence to the Allies to the more violent manifestations of resistance through sabotage and armed insurrection. For many people, resistance was not an occupation or an identity, but an activity: a person would deliver a cache of stolen documents to armed partisans and then seamlessly return to their normal life. For Jews under Nazi rule, meanwhile, the stakes at every point were life and death; resistance was less about national restoration than about mere survival.

Why resist at all? Who is the real enemy? What kind of future are we risking our lives for? These and other questions animated those who resisted. With penetrating insight, Kochanski reveals that the single quality that defined resistance across borders was resilience: despite the constant arrests and executions, resistance movements rebuilt themselves time and time again. A landmark history that will endure for decades to come, Resistance forces every reader to ask themselves yet another question, this distinct to our own times: “What would I have done?”

Halik Kochanski is a British historian. A Fellow of the Royal Historical Society, she has taught history at several universities and is the author of The Eagle Unbowed: Poland and the Poles in the Second World War. She lives in England.
Kochanski tells this story effectively on the basis of deep research . . . Her long book is always interesting and readable, sensitive to the powerful human drama it presents . . . this is an instructive book. Kochanski tells us of Norwegian teachers who stood up to their puppet government’s demands to reshape the school curriculum, and of the oath of the pro-fascist Vichy French police force, the Milice, whose members swore their opposition to ‘democracy, individualism and international capitalism’ and their support for ‘an authoritarian, national socialist regime.’ One does not need to listen too closely to detect the melancholy echoes in our own time.
— Benjamin Carter Hett - New York Times Book Review

This ambitious history offers the first unified picture of resistance against Nazi Germany in the many countries it invaded . . . Dispensing with heroics and highlighting the imperfect, human nature of the underground, [Kochanski] nevertheless depicts a vital defense of dignity, spirit, and the future, mounted against all odds.
— New Yorker

In her unflinching and sober account of the response of ordinary people under occupation, Kochanski shows that there is no straightforward answer to the question of why some Europeans chose to resist the Nazis while most did not. . . . A nuanced and dispassionate study, Resistance nonetheless pays tribute to those who ‘were determined to thwart the designs of the Germans, to harass them, to deny them the opportunity to ever assert total control over the peoples of Europe.’ Ideas of independence and dignity were at the heart of the struggle—worth fighting and even dying for.

[E]minently readable . . . wide-ranging and thoroughly researched . . . subtle, multilayered and kaleidoscopic . . . Kochanski’s gripping account of the activities of the resistance and those sent from, mainly, Britain to work with them includes, as might be expected, tales of derring-do and extraordinary courage as well as tragedy, betrayal and Nazi barbarism.
— Andrew Stuttaford - Wall Street Journal

[R]eads less like a work of history and more like a chronicle of a partisan war foretold . . . The thematic structure that Kochanski has given to her book, her scrupulous scholarship, and her refusal to romanticize the grim, grimy work of being a resister, does make Resistance something of a primer for the many Ukrainians now fighting to undermine Russian authority over the areas of our country that the invader now occupies.
— Yuliya Tymoshenko, former prime minister of Ukraine, writing in Project Syndicate

This is an exceptionally clear and comprehensive study, which deserves to become a standard reference work on the subject.
— David Porter - Military History

This is the most comprehensive and best account of resistance I have read. It addresses the story with scholarly objectivity and an absolute lack of sentimentality. So much romantic twaddle is still published . . . it is marvelous to read a study of such breadth and depth, which reaches balanced judgments.
— Max Hastings - Sunday Times (UK)

An oft-romanticized aspect of WWII was fraught with dark moral ambiguity, according to this sweeping history of anti-Nazi resistance . . . in elegant prose, Kochanski balances meticulous detail with a broad analysis of patterns across movements—including the strategies of the British Special Operations Executive agents who tried to organize and manage them—and the experiences of individual resistance figures. This superb study demythologizes resistance movements while capturing their full drama.
— Publishers Weekly, starred review

Individual national histories have documented these efforts, but Kochanski ... pulls back to take in both Eastern and Western Europe, revealing a wider perspective on these underground movements . . . Kochanski, after first surveying the breadth of Germany’s conquests, details the growth of resistance movements in all their manifestations, from sabotage to assassination . . . She also casts revealing light in chapters devoted to both the Christian and Jewish responses to the Holocaust. In this massive work of research, Kochanski brings together individual stories and larger historical forces to document how ordinary people successfully challenged what seemed overwhelming military might.
— Mark Knoblauch, Booklist, starred review

A magisterial doorstop of a history that is well worth the effort... Impressively debunking myths and deconstructing faulty history, Kochanski adds that a resistance movement was active in every conquered nation, and heroism was widespread.... Kochanski continues her masterful chronicle beyond Germany’s surrender.... A definitive history and a great read.
— Kirkus Reviews, starred review

Ambitious... The book’s organization is thematic, chronological, and geographic, which is important in a work of this scope. The story of the resistance is a messy one, and Kochanski needs all of the book’s 960 pages to tell it thoroughly.
— Michael Farrell - Library Journal