InvestiGators: All Tide Up (Hardcover) 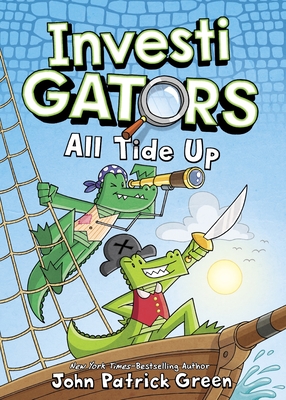 InvestiGators: All Tide Up (Hardcover)

This is book number 7 in the InvestiGators series.

New York Times bestsellers and sewer surfing super-sleuths Mango & Brash are back in the seventh volume of the smash hit InvestiGators series!

Unsinkable detectives Mango and Brash are back in InvestiGators: All Tide Up, a high seas adventure that takes the hit series by John Patrick Green to uncharted waters!

When a cruise captain is found drifting at sea and delirious, the search begins for his missing ship and passengers! Did it sink? Was it boat-napped? Are supernatural forces at play? And can the InvestiGators unravel this maritime mystery before a second cruise befalls a similarly unfathomable fate? Seas the day and find out in this new nautical adventure!

John Patrick Green is a human with the human job of making books about animals with human jobs, notably the smash-hit graphic novel series InvestiGators. John is definitely a multiple New York Times-bestselling human author and not just a bunch of animals in a trench coat pretending to have a human job. With over a million copies of InvestiGators in print, John is a successful human being with only two hands and a normal amount of fur. He lives in a Brooklyn apartment that doesn't allow animals other than the ones living in his head.