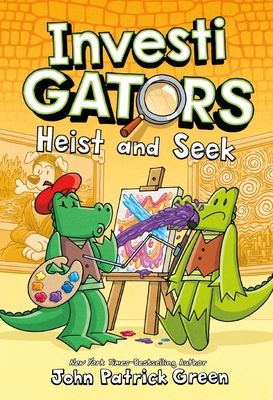 This is book number 6 in the InvestiGators series.

When rare paintings go missing, the InvestiGators are called on the scene...the ART SCENE!

Mango and Brash go undercover and under canvas as internationally renowned painters to expose a crook who has truly mastered the art of CRIME! Can they recover the missing masterpieces and save the city art museum’s fundraising gala before it's too late...and they run out of appetizers? Find out in this latest pièce de résistance of action-packed illustrated fun.

John Patrick Green is a human with the human job of making books about animals with human jobs, notably the smash-hit graphic novel series InvestiGators. John is definitely a multiple New York Times-bestselling human author and not just a bunch of animals in a trench coat pretending to have a human job. With over a million copies of InvestiGators in print, John is a successful human being with only two hands and a normal amount of fur. He lives in a Brooklyn apartment that doesn't allow animals other than the ones living in his head.