Back of Beyond: A Cody Hoyt Novel (Cassie Dewell Novels #1) (Mass Market) 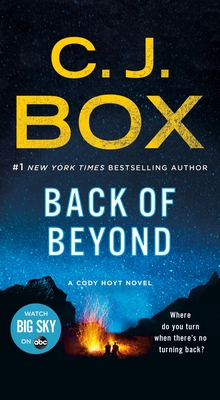 Back of Beyond: A Cody Hoyt Novel (Cassie Dewell Novels #1) (Mass Market)

This is book number 1 in the Cassie Dewell Novels series.

Back of Beyond is the first book in the thrilling Highway Quartet series from the New York Times bestselling author C.J. Box.

"One of the most suspenseful wilderness thrillers since Deliverance." —Associated Press

Cody Hoyt, although a brilliant cop, is an alcoholic struggling with two months of sobriety when his friend Hank Winters turns up dead in a remote mountain cabin. At first it looks like the suicide of a man who’s fallen off the wagon, but Cody knows Hank better than that. As Cody digs deeper into the case, all roads lead to foul play. After years of bad behavior with his department, Cody is in no position to be investigating a homicide. But he will stop at nothing to find out who murdered Hank. And why…

When clues found at the scene link the murderer to an outfitter leading tourists on a multiday wilderness horseback trip in Yellowstone National Park, Cody is desperate to get on the trail and stop the killer in his tracks. There’s only one catch: his own son, Justin, is among the tourists. Now, in one of the most remote places on earth, Cody must enter a deadly cat-and-mouse game with a ruthless enemy who seems to know his every move...and is hell-bent on destroying the only important thing in Cody’s life he has left.

C. J. Box is the author of more than thirty books, including the Joe Pickett series and the Cassie Dewell series, and a story collection. His books have been translated into twenty-seven languages. He has won the Edgar, Anthony, Macavity, Gumshoe, and Barry Awards, as well as the French Prix Calibre .38, and has been a Los Angeles Times Book Prize finalist. A Wyoming native, Box has also worked on a ranch and as a small-town newspaper reporter and editor. He’s an executive producer of ABC TV’s Big Sky, which is based on his Cody Hoyt/Cassie Dewell novels, as well as executive producer of the Joe Pickett television series for Spectrum Originals. He lives with his wife on their ranch in Wyoming.