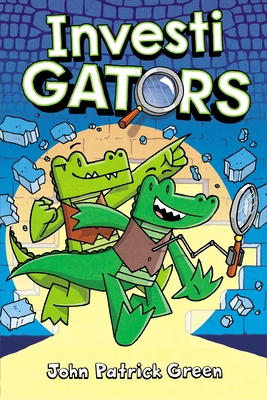 This is book number 1 in the InvestiGators series.

John Patrick Green's goofy graphic novel series follows the super spy alligator duo the InvestiGators as they travel through the sewers and fight the forces of evil.

MANGO and BRASH are the INVESTIGATORS:
sewer-loving agents of S.U.I.T.* and scourge of supervillains everywhere!

With their Very Exciting Spy Technology and their tried-and-true, toilet-based travel techniques, the InvestiGators are undercover and on the case! And on their first mission together, they have not one but two mysteries to solve! Can Mango and Brash uncover the clues, crack their cases, and corral the crooks—or will the criminals wriggle out of their grasp?

John Patrick Green is a human with the human job of making books about animals with human jobs, such as Hippopotamister, Kitten Construction Company, and InvestiGators. John is definitely not just a bunch of animals wearing a human suit pretending to have a human job. He is also the artist and co-creator of the graphic novel series Teen Boat!, with writer Dave Roman. John lives in Brooklyn in an apartment that doesn't allow animals other than the ones living in his head.

"...has heaping helpings of surreal alligator action and wordplay gags to keep new readers bent on solving the mystery." —The New York Times

"With its rampant good-natured goofiness and its unrelenting fizz and pep, this feels like a sugar rush manifested as a graphic novel. Silly and inventive fast-paced fun." —Kirkus

"Like the heroes of Dav Pilkey’s “Dog Man” or “Captain Underpants,” the Investigators are bound to resonate with kids." —School Library Journal: XpressReviews