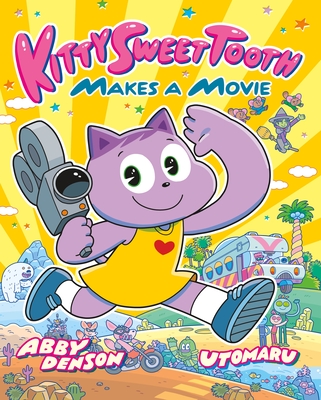 In this sequel to an adorable and silly graphic novel for young readers, Kitty Sweet Tooth gets behind the camera and makes her own movie!

There’s just one thing Kitty Sweet Tooth loves more than going to the movies, and that’s eating delicious desserts. She’s combined her two passions in the Taste-O-Rama, a movie house where screenings are paired with tasty treats. But Kitty isn't satisfied just watching movies. She wants to make one!


With a film crew that includes Dr. Battina and Walter Witch, Kitty embarks on a quest. Her mission: to find the world's rarest and tastiest ingredients and capture it all on film. Will Kitty and her friends make the documentary of a lifetime, or will this film be a flop?

Abby Denson is the author of Uniquely Japan, Cool Tokyo Guide, Cool Japan Guide, Dolltopia, and Tough Love: High School Confidential. She has written for comics including The Amazing Spider-Man Family, The Powerpuff Girls, The Simpsons, Sabrina the Teenage Witch, and Disney Adventures. Abby is the writer (with artist Utomaru) of the Kitty Sweet Tooth graphic novel series from First Second.

Utomaru is a Tokyo-based illustrator, art director, and graphic designer whose credits include character design on Muteking the Dancing Hero, a reboot of a classic anime series, and illustrating the Kitty Sweet Tooth graphic novel series. She studied graphic design at Tama Art University and her main influences are cartoons by Fleischer Studios and Tex Avery, movie posters from the 1960s to the 1980s, as well as American and Japanese comics and animation.

"The art is truly magical. There are so many fun details, plus the unique settings and costume changes. The colors just pop, too!"—Sheena McNeil for Sequential Tart