Our Auntie Rosa: The Family of Rosa Parks Remembers Her Life and Lessons (Paperback) 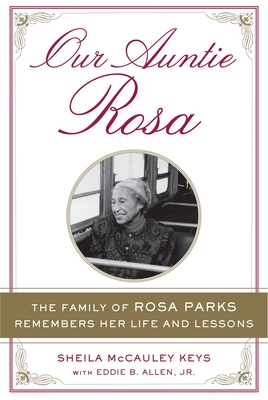 Our Auntie Rosa: The Family of Rosa Parks Remembers Her Life and Lessons (Paperback)


This book is currently on backorder. Please call or email for availability.
Our Auntie Rosa is the most intimate portrait yet of the great American hero—"the lady who refused to sit in the back of the bus."

The family of Rosa Parks share their remembrances of the woman who was not only the mother of the civil rights movement, but a nurturing mother figure to them as well. Her brave act on a bus in Montgomery, Alabama, on December 1, 1955, was just one moment in a life lived with great humility and decency.

After the deaths of Rosa Parks's husband and brother, her nieces and nephews became her only family and the closest that she would ever experience to having biological sons and daughters. In this book, they share with readers what she shared with them about her experiences growing up in a racist South, her deep dedication to truth and justice, and the personal values she held closest to her heart.
Sheila McCauley Keys is the seventh niece of civil rights heroine Rosa Parks. In 2013, Keys was featured in PBS's live television broadcast of the National Day of Courage, celebrating what would have been Mrs. Parks's hundredth birthday. That same year, Keys joined President Obama and legislators in unveiling a statue of Rosa Parks in the Capitol Rotunda. Keys has become an active voice in efforts to preserve her aunt's legacy.

Eddie B. Allen Jr. is the author of Low Road: The Life and Legacy of Donald Goines and is an award-winning reporter and freelance journalist whose work has appeared in The New York Times and the Detroit Free Press, on BET.com, and with Reuters and the Associated Press. A Rosa Parks Scholarship recipient at age seventeen, he later covered Parks's nationally televised funeral, as well as various aspects of the freedom struggle that carries her footprint.
“Rosa Parks inspired millions of Americans in 1955, including a nine-year-old boy in Arkansas learning about her story. Through the pages of Our Auntie Rosa, her family captures the quiet dignity—and commanding conviction—of one of the civil rights movement’s bravest champions.”
—President Bill Clinton

“For years Mrs. Rosa Parks’s family graciously shared her with the world. Yet the civil rights icon revered as the ‘Mother of the Movement’ was also their beloved ‘Auntie Rosa,’ and with Our Auntie Rosa they are now just as generously sharing their personal memories and photographs to give us all a chance to better know the extraordinary real woman and family whose courage changed history.”
—Marian Wright Edelman, president, Children’s Defense Fund

“What a joy to discover that Rosa Parks, an international figure and ‘Mother of The Movement,’ was as dignified and heroic a private woman as she was a civil rights icon. This beautiful tribute, lovingly written by family members, completes the picture of a 20th century inspiration. As compelling as what she sat down for on a bus is what she stood for at home.”
—Mitch Albom, author of Tuesdays with Morrie and The First Phone Call from Heaven

"Our Auntie Rosa gives us a glimpse into the private life of an extraordinary woman who played her part in American history with courage, intelligence, and grace. We are inspired by her life and forever grateful to her family for sharing her with us all."
—Pearl Cleage, author of Things I Should Have Told My Daughter

“Rosa Parks’s bus-sitting was a stand-up call for millions and I was one of them. Yet there was a personal and public price to pay for her undaunted commitment to social justice and her people. Our Auntie Rosa is a powerful new telling and an insightful love note from her ‘daughters and sons’ whom she did not birth biologically, but through cultural and familial bonds they are linked nonetheless. This is a critical and contemplative immersion into their stories of their aunt and is a must-read if we are to accurately understand one of our nation’s most revered women and mother of the civil rights movement.”
—Haki R. Madhubuti, author of YellowBlack

“Our Auntie Rosa is an enjoyable read about an icon shared through stories of family life, legacy, and living that convey Rosa Parks’s unmatched voice and influence on the modern-day civil rights movement.”
—Joyce Beatty, U.S. congresswoman for Ohio's 3rd Congressional District