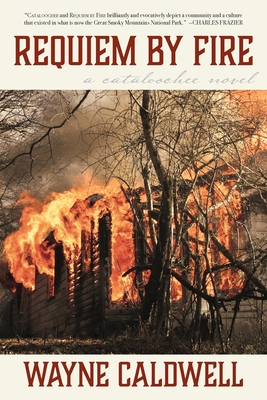 On the tails of Caldwell's stunning debut, Cataloochee, comes Requiem By Fire, an expansive tale of land and the generations of people who live from it and die on it.

1928. Rural Western North Carolina. The US Parks Services are here with cash on table to expand the national parks, and the folks currently occupying that land are faced with a decision. In this poignant, often riotously funny, and deeply human novel from Wayne Caldwell, we meet a stunning array of characters here to take us into their homes as they are faced with a watershed moment-one that comes to define the history of the area. Take the money and adjust to modernity? Or hold onto a past defined by those who've lived on the land for generations?

In paperback for the first time, Requiem By Fire is an essentially Appalachian tale, one only made possible by Caldwell's unparalleled knack for characterization and sense of place. With bawdy wit and moving narration, readers can expect Appalachian storytelling at its most powerful.

Wayne Caldwell was born in Asheville, North Carolina, and was educated at the University of North Carolina at Chapel Hill, Appalachian State University, and Duke University. The author of Cataloochee, he began writing fiction in the late 1990s. Caldwell lives near Asheville with his wife, Mary.

Wayne Caldwell was born in Asheville, North Carolina, and was educated at the University of North Carolina at Chapel Hill, Appalachian State University, and Duke University. The author of Cataloochee, he began writing fiction in the late 1990s. Caldwell lives near Asheville with his wife, Mary.
“Cataloochee and Requiem by Fire brilliantly and evocatively depict a community and a culture that existed in what is now the Great Smoky Mountains National Park.” —Charles Frazier

"In this remarkable novel, Wayne Caldwell has brought a forgotten world vividly back to life, giving voice to voices too long ignored. He is an Appalachian treasure, but Requiem by Fire's story of love and loss transcends regional concerns to speak to all places and all people. I am delighted to see it back in print. Kudos to Leaning Chair Press for bringing one of our region's most important novels back into print." -RON RASH, author of Serena

"In Requiem by Fire, Wayne Caldwell takes us back to the heartrendingly beau tiful landscape of the Cataloochee Valley. There, he takes us inside the great human questions rendered Appalachian style: how to honor the past when face-to-face with the future, how to keep an union alive between two disparate individuals, and how to counteract true evil with something like honor and decency. Pour yourself a dollop of whiskey, sit down and enjoy this tale … it sings!" -TERRY ROBERTS, author of That Bright Land

“The word ‘requiem’ is defined in various dictionaries as ‘a shrine,’ ‘a token of remem brance,’ ‘a musical composition’ or in the latin meaning ‘require’ or ‘rest’. No matter how you define the word, Requiem by Fire satisfies all of these definitional requirements. With feast or famine type conflicts of stay or leave, survive or perish, Caldwell shows up in his second novel as both talented musician and penman and as one of the un disputed kings of the genre of Appalachian Noir. As the definition dictates, this book should be required reading.”
-THOMAS RAIN CROWE, author of Zoro’s Field: My Life
in the Appalachian Woods

"Wayne Caldwell’s Cataloochee is one of the finest novels of recent years set in the Southern Appalachian Mountains. Requiem by Fire is equally memorable. Caldwell has an unusual ability to create, not only vivid characters, but the complex character of a whole community. This second novel is the story of conflict between independence and authority, between colliding visions of community and the future, and the very meaning of community. Wayne Caldwell has give us an authentic window on a particular time and place, especially relevant to our times and our own lives." -ROBERT MORGAN, author of Gap Creek