The Debate on the Constitution: Federalist and Antifederalist Speeches, Article s, and Letters During the Struggle over Ratification Vol. 2 (LOA #63) (Library of America Debate on Constitution Collection #2) (Hardcover) 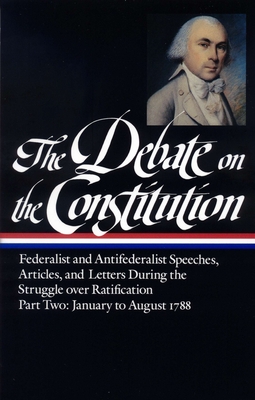 The Debate on the Constitution: Federalist and Antifederalist Speeches, Article s, and Letters During the Struggle over Ratification Vol. 2 (LOA #63) (Library of America Debate on Constitution Collection #2) (Hardcover)

This is book number 2 in the Library of America Debate on Constitution Collection series.

Here, on a scale unmatched by any previous collection, is the extraordinary energy and eloquence of our first national political campaign: During the secret proceedings of the Constitutional Convention in 1787, the framers created a fundamentally new national plan to replace the Articles of Confederation and then submitted it to conventions in each state for ratification. Immediately, a fierce storm of argument broke. Federalist supporters, Antifederalist opponents, and seekers of a middle ground strove to balance public order and personal liberty as they praised, condemned, challenged, and analyzed the new Constitution Gathering hundreds of original texts by Franklin, Madison, Jefferson, Washington, and Patrick Henry—as well as many others less well known today—this unrivaled collection allows readers to experience firsthand the intense year-long struggle that created what remains the world’s oldest working national charter.

Assembled here in chronological order are hundreds of newspaper articles, pamphlets, speeches, and private letters written or delivered in the aftermath of the Constitutional Convention. Along with familiar figures like Franklin, Madison, Patrick Henry, Jefferson, and Washington, scores of less famous citizens are represented, all speaking clearly and passionately about government. The most famous writings of the ratification struggle — the Federalist essays of Hamilton and Madison — are placed in their original context, alongside the arguments of able antagonists, such as "Brutus" and the "Federal Farmer."

Part Two gathers collected press polemics and private commentaries from January to August 1788, including all the amendments proposed by state ratifying conventions as well as dozens of speeches from the South Carolina, Virginia, New York, and North Carolina conventions. Included are dramatic confrontations from Virginia, where Patrick Henry pitted his legendary oratorical skills against the persuasive logic of Madison, and from New York, where Alexander Hamilton faced the brilliant Antifederalist Melancton Smith.

Informative notes, biographical profiles of all writers, speakers, and recipients, and a detailed chronology of relevant events from 1774 to 1804 provide fascinating background. A general index allows readers to follow specific topics, and an appendix includes the Declaration of Independence, the Articles of Confederation, and the Constitution (with all amendments).

LIBRARY OF AMERICA is an independent nonprofit cultural organization founded in 1979 to preserve our nation’s literary heritage by publishing, and keeping permanently in print, America’s best and most significant writing. The Library of America series includes more than 300 volumes to date, authoritative editions that average 1,000 pages in length, feature cloth covers, sewn bindings, and ribbon markers, and are printed on premium acid-free paper that will last for centuries.
BERNARD BAILYN is Adams University Professor and James Duncan Phillips Professor of Early American History, emeritus, at Harvard University. He is the author many acclaimed works, including The Ideological Origins of the American Revolution and Voyagers to the West: A Passage in the Peopling of America on the Eve of the Revolution.
"The best resource for understanding the morning headlines I've seen in a long time." — Bill Moyers

"An easily accessible set of sacred writings for America's civil religion, these two books are composed of the very stuff of history." — The Chicago Tribune

"Not only is it wonderful writing, it is wonderful thinking." — Nina Totenberg, NPR