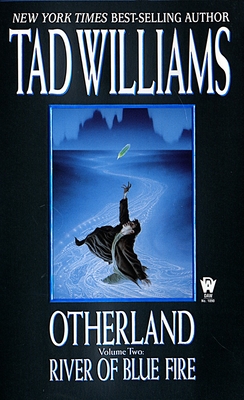 Otherland. In many ways it is humankind's most stunning achievement: a private, multidimensional universe built over two generations by the greatest minds of the twenty-first century. But this most exclusive of places is also one of the world's best kept secrets, created and controlled by an organization made up of the world's most powerful and ruthless individuals, a private cartel known—to those who know of their existence at all—as The Grail Brotherhood.

Though their purpose in creating Otherland is still a mystery, it may not remain so for long. For they have exacted a terrible price from humanity in the process, and even their highly organized global conspiracy cannot hide the nature of their crimes forever.

And now a small band of adventurers has penetrated the veil of secrecy that prevents the uninitiated from entering Otherland. But having broken into the amazing worlds within worlds that make up this universe, they are trapped, unable to escape back to their own flesh-and-blood bodies in the real world.

And as dangers and circumstances split their party into small, widely scattered groups, their only hope of reuniting lies in returning again and again to the River that flows—in one form or another—through all the worlds.

But the odds seem to be completely against them as they—and the one outsider with whom they might join forces—become hopelessly lost in realms where an Ice Age tribe's fears can only be quenched in blood...where insects are as large and deadly as dinosaurs...where they are caught in the war between a man made of straw and one made of tin...where cartoon ads take on a life of their own...where humans strive to survive in the aftermath of an alien invasion...and where one among their party is actually The Grail Brotherhood's most terrifying weapon—a sociopathic killer who has never failed and whose current mission is to make certain that not even one member of this little invasion force lives long enough to reveal the truth about Otherland to the people of Earth...

Tad Williams has held more jobs than any sane person should admit to—singing in a band, selling shoes, managing a financial institution, throwing newspapers, and designing military manuals, to name just a few. He also hosted a syndicated radio show for ten years, worked in theater and television production, taught both grade-school and college classes, and worked in multimedia for a major computer firm. He is cofounder of an interactive television company, and is currently writing comic books and film and television scripts as well. Tad and his family live in London and the San Francisco Bay Area. You can find Tad Williams at tadwilliams.com.
Praise for the Otherland series:

“Tad Williams is the brightest and best of the fantasists working in what is so often, and so inaccurately, described as ‘the tradition of J.R.R. Tolkien’.” ―Neil Gaiman, author of American Gods

“Irresistible characters, challenging ideas, an intricate, and startlingly possible plot―everything any reader of SF or fantasy could ask for in a novel, with gorgeous writing besides. A dazzling book.” ―Melanie Rawn, author of Dragon Prince

“This brilliantly crafted book delivers even more than its title promises: not one other land but many come to life here, each engrossing, glittering, and dangerous. In this intricate geography of the mind Williams tells a cracking good story, but even as the suspense builds, you come to realize that you’re seeing a strangely familiar world―ours as it might come to be. Otherland is one of the best works of science fiction I’ve ever read.” ―Kathrine Kerr, author of the Dragon Mage series

“Williams is an exciting and endlessly inventive writer whose character development is particularly strong, and his fans should roundly enjoy this volume while looking forward to the remaining installments.” ―Publishers Weekly

“Excellent, imaginative writing definitely make this a must for the audience of fantasy and cyber-fiction readers.” ―VOYA

“A powerful story.... Williams depicts the band’s adventures vividly, sometimes giving them a satirical edge, sometimes a didactic one, and sometimes both.... The work of a powerful imagination.” ―Booklist