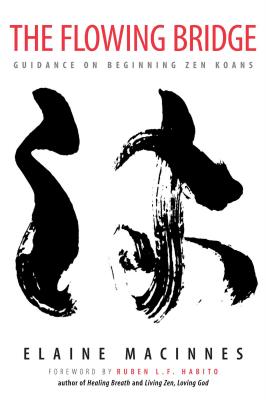 
On Our Shelves Now
Koans--such as "What is the sound of one hand clapping?"--have penetrated deeply into popular consciousness. Yet, those who encounter koans in the traditional literature or in the context of exploring Zen practice themselves can often find them utterly baffling.

The Flowing Bridge is the first-ever book to address all of the first koans that Zen students encounter in practice--"What is Mu?" "What is the sound of the single hand?" and the so-called "miscellaneous" koans--that have historically been closely guarded by master and disciple as esoteric treasures.

Elaine MacIness, a Catholic nun and a Zen teacher in the lineage of the renowned master Koun Yamada (author of Wisdom's The Gateless Gate), offers exceptionally valuable guidance to beginners on how to work with koans-and reveals an uncommon depth of insight and an easy technical mastery of Zen's most misunderstood and most powerful tools. This book is sure to become a classic, standing alongside The Gateless Gate and The Blue Cliff Record as a must-read for anyone seeking Zen's subtlest teachings and deepest power.
Elaine MacInnes, a member of Our Lady's Missionaries, studied koans with, and was authorized to teach by, the renowned Zen master Koun Yamada. She has established zendos in the Philippines and in Canada. She has served as the director of the Prison Phoenix Trust in England, and has placed meditation teachers in over 86 prisons, and she is also the founder of Freeing the Human Spirit, a Canadian charity that also teaches meditation to prisoners. In 2001, she was made an Officer of the Order of Canada. She lives in Toronto.

A former Jesuit priest, Ruben L.F. Habito is professor of world religions and spirituality at Perkins School of Theology, Southern Methodist University, and resident teacher at Maria Kannon Zen Center in Dallas, Texas. A dharma heir of Yamada Koun, he is also the author of Healing Breath and other works in Japanese and English.
"After a Zen student has had a first awakening experience, the most important phase of training begins. In the Rinzai tradition, that training includes mastery of a series of 'miscellaneous' koans, which vary according to the lineage. With grace and deep insight, Elaine MacInnes has presented pointers to the beginning koans of her teacher Koun Yamada Roshi. Zen students everywhere are grateful for her profound and skillful contribution to our practice."
— Gerry Shishin Wick, author of The Book of Equanimity, and co-author of The Great Heart Way

"Elaine MacInnes is a Catholic nun and a Zen teacher in the lineage of the renowned master Koun Yamada. Over the years, she established zendos in the Philippines and in Canada. MacInnes has served as the director of the Prison Phoenix Trust in England, placing meditation teachers in more than 86 prisons. In this paperback, the author examines all the first koans that Zen students encounter in practice. MacInnes helps us to see the way koans enable us to let go of that which is unimportant."
— Spirituality and Practice

"This book is the only one so far that takes up the Miscellaneous Koans, a small but very important collection that can play a crucial part in a practitioner's training. Zen Master Elaine MacInnes has given the world a great gift."
— Ruben L.F. Habito, author of Living Zen, Loving God

"Who would have thought one of the most formidable Zen masters in the West would be a Roman Catholic nun living in retirement in a Toronto convent? With skill and grace Sister Elaine MacInnes guides us through a long neglected but essential aspect of koan introspection. A foundational work for anyone wishing to take up koan practice as an authentic spiritual discipline."
— James Ishmael Ford, Guiding Teacher of Boundless Way Zen and author of Zen Master Who? and If You're Lucky, Your Heart Will Break