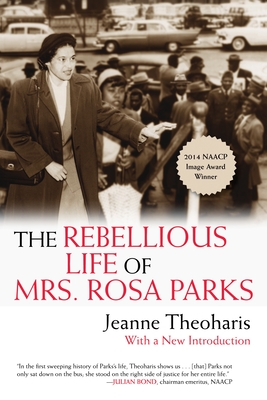 
Not Currently On Our Shelves. Usually Ships in 1-5 Days.
The basis for the documentary of the same name executive produced by award-winning journalist Soledad O’Brien. The Rebellious Life of Mrs. Rosa Parks premieres on Peacock on October 19.

The definitive political biography of Rosa Parks examines her six decades of activism, challenging perceptions of her as an accidental actor in the civil rights movement.

This revised edition includes a new introduction by the author, who reflects on materials in the Rosa Parks estate, purchased by Howard Buffett in 2014 and opened to the public at the Library of Congress in February 2015. Theoharis contextualizes this rich material—made available to the public for the very first time and including more than seven thousand documents—and deepens our understanding of Parks’s personal, financial, and political struggles.

Presenting a powerful corrective to the popular iconography of Rosa Parks as the quiet seamstress who with a single act birthed the modern civil rights movement, scholar Jeanne Theoharis excavates Parks’s political philosophy and six decades of activism. Theoharis masterfully details the political depth of a national heroine who dedicated her life to fighting American inequality and, in the process, resurrects a civil rights movement radical who has been hidden in plain sight far too long.
Jeanne Theoharis is Distinguished Professor of Political Science at Brooklyn College of the City University of New York. She received an A.B. in Afro-American studies from Harvard College and a Ph.D. in American culture from the University of Michigan. She is the author or coauthor of six books and numerous articles on the black freedom struggle and the contemporary politics of race in the United States
“In the first sweeping history of Parks’s life, Theoharis shows us...[that] Parks not only sat down on the bus; she stood on the right side of justice for her entire life.”
—Julian Bond, chairman emeritus, NAACP

“The Rebellious Life of Mrs. Rosa Parks will undoubtedly be hailed as one of the most important scholarly contributions to civil rights history ever written. … I can’t wait to assign this book in every class I teach.”
—Melissa Harris-Perry, host, MSNBC’s Melissa Harris-Perry

“Theoharis brings all of her talents as a political scientist and historian of the civil rights movement to bear on this illuminating biography of the great Rosa Parks.”
—Henry Louis Gates Jr.

“The Rosa Parks in this book is as much Malcolm X as she is Martin Luther King Jr.”
—Charles Blow, The New York Times

"Charisma is not a word often used to describe Rosa Parks yet we have to recognize her star. The Rosa Parks challenge to the political system was deep and lasting even while she never raised her voice. The first female Speaker of the House of Representatives once said, 'You can get a lot done if you don’t need to take credit for it.' She took a page from the book of Parks. Theoharis’ scholarship brings forth a woman whom many followed without ever realizing they were. She was courageous and strong. She also had a wonderful sense of humor. And an awesome sense of responsibility. This is a much needed book on the woman who is, arguably, the most important person in the last half of the twentieth century. Just as the Lincoln Memorial needs a statue of Frederick Douglass gently bending over with a pen in his hand for Lincoln to sign the Emancipation Proclamation, the statue of Martin Luther King, Jr. needs a statue of Rosa Parks just one or two steps ahead mouthing the words: 'Come on, Dr. King. We’ve got work to do.'"
—Nikki Giovanni, Poet

“How Theoharis learned the true nature of this woman is a story in itself. Parks always stood in the background, never volunteered information about herself and eschewed fame. There were no letters to consult; even her autobiography exposed little of the woman’s personality. She hid her light under a bushel, and it has taken an astute author to find the real Parks. Even though her refusal to give up her bus seat sparked a revolution, Rosa Parks was no accidental heroine. She was born to it, and Theoharis ably shows us how and why.”
—Kirkus Reviews, Starred Review

“Historian Theoharis offers a complex portrait of a forceful, determined woman who had long been active before the boycott she inspired and who had an even longer career in civil rights afterward.”
—Booklist

"Theoharis submits a lavishly well-documented study of Parks’s life and career as an activist.”
—Publishers Weekly

"Verdict: This meticulously researched book is for everyone; advanced middle school and beyond.”
—Library Journal

“Jeanne Theoharis has written an eye-opening biography of Rosa Parks. It was ideal for the classroom: smart, brisk, and engaging. Best of all, Theoharis explodes all of the clichés surrounding a historical figure whom most students thought they knew. I will assign this book again and again.”
—Thomas J. Sugrue, David Boies Professor of History and Sociology, University of Pennsylvania

“Jeanne Theoharis’s Rosa Parks is a pedagogical gift. Clearly written, forcefully argued, and filled with important and groundbreaking historical insights about the civil rights era, black women’s indelible political and intellectual framing of the movement, and the deep-seated black radicalism that undergirded the entire era. A must read book for every course on the civil rights movement.
—Peniel E. Joseph, Professor of History at Tufts University and author of Waiting ‘til the Midnight Hour: A Narrative History of Black Power in America