The World in Flames: A Black Boyhood in a White Supremacist Doomsday Cult (Paperback) 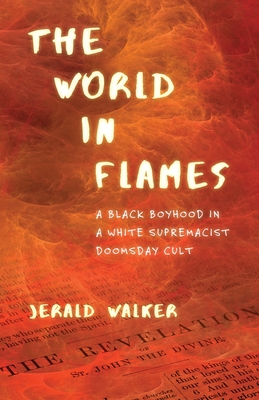 The World in Flames: A Black Boyhood in a White Supremacist Doomsday Cult (Paperback)


Not Currently On Our Shelves. Usually Ships in 1-5 Days.
A lively memoir of growing up with blind African American parents in a segregated cult preaching the imminent end of the world—for fans of James McBride’s The Good Lord Bird.

It’s 1970, and Jerry Walker is six years old. His consciousness revolves around being a member of a church whose beliefs he finds not only confusing but terrifying. Composed of a hodgepodge of requirements and restrictions—including a prohibition against doctors and hospitals—the underpinning tenet of Herbert W. Armstrong’s Worldwide Church of God was that its members were divinely chosen and all others would soon perish in rivers of flames.

The substantial membership was ruled by fear, intimidation, and threats. Anyone who dared leave the church would endure hardship for the remainder of this life and eternal suffering in the next. The next life, according to Armstrong, would arrive in 1975, three years after the start of the Great Tribulation. Jerry would be eleven years old.

Jerry’s parents were particularly vulnerable to the promise of relief from the world’s hardships. When they joined the church, in 1960, they were living in a two-room apartment in a dangerous Chicago housing project with the first four of their seven children, and, most significantly, they both were blind, having lost their sight to childhood accidents. They took comfort in the belief that they had been chosen for a special afterlife, even if it meant following a religion with a white supremacist ideology and dutifully sending tithes to Armstrong, whose church boasted more than 100,000 members and more than $80 million in annual revenues at its height.

When the prophecy of the 1972 Great Tribulation does not materialize, Jerry is considerably less disappointed than relieved. When the 1975 end-time prophecy also fails, he finally begins to question his faith and imagine the possibility of choosing a destiny of his own.
Jerald Walker is a professor of creative writing at Emerson College. His writing has appeared in publications such as the Harvard Review, Mother Jones, the Iowa Review; the Missouri Review; the Oxford American; the Chronicle of Higher Education, and Creative Nonfiction, as well as four times in Best American Essays. He is the author of Street Shadows: A Memoir of Race, Rebellion, Redemption, which won the PEN New England/L. L. Winship Award for Nonfiction, and How to Make a Slave and Other Essays which is a finalist for the 2020 National Book Award in Nonfiction.
“The key to the memoir’s cumulative power is Walker’s narrative command; the rite of passage is rockier than most, making the redemption well-earned.”
—Kirkus Reviews, starred review

“Jerald Walker has a remarkable story to tell, and he tells it with a wealth of grace and intelligence at his command.”
—Vivian Gornick