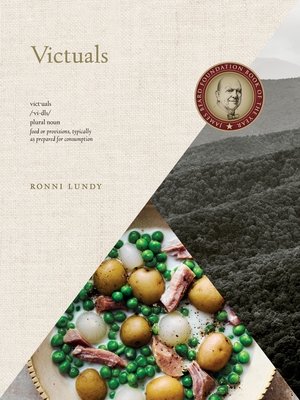 
On Our Shelves Now
Winner of the James Beard Foundation Book of the Year Award and Best Book, American Cooking, Victuals is an exploration of the foodways, people, and places of Appalachia.

Written by Ronni Lundy, regarded as the most engaging authority on the region, Victuals guides us through the surprisingly diverse history--and vibrant present--of food in the Mountain South. Victuals explores the diverse and complex food scene of the Mountain South through recipes, stories, traditions, and innovations. Each chapter explores a specific defining food or tradition of the region--such as salt, beans, corn (and corn liquor). The essays introduce readers to their rich histories and the farmers, curers, hunters, and chefs who define the region's contemporary landscape. Sitting at a diverse intersection of cuisines, Appalachia offers a wide range of ingredients and products that can be transformed using traditional methods and contemporary applications. Through 80 recipes and stories gathered on her travels in the region, Lundy shares dishes that distill the story and flavors of the Mountain South.


– Epicurious: Best Cookbooks of 2016
Born in Corbin, Kentucky, RONNI LUNDY has long chronicled the people of the hillbilly diaspora as a journalist and cookbook author. She is the former restaurant reviewer and music critic for The Courier-Journal in Louisville, former editor of Louisville Magazine, and has contributed to many national magazines. Her book Shuck Beans, Stack Cakes and Honest Fried Chicken was recognized by Gourmet magazine as one of six essential books on Southern cooking. In 2009, Lundy received the Southern Foodways Alliance Craig Claiborne Lifetime Achievement Award. She has contributed to Eating Well,Gourmet, Bon Appétit, Esquire, and other magazines.
“Victuals promises to be the jewel in [Ronni Lundy’s] crown, setting the record straight about her native cuisine, too long dismissed as homogenized, and telling instead the real story of a cookery thrillingly formed at the crossings of African, European, and Native Nation traditions. Did we mention it comes with recipes?”--Oxford American

"Each chapter of Victuals focuses on a tentpole of Appalachian cuisine; an ingredient or a tradition. Essays on each, along with 80 recipes, tell the story of this diverse mountain cuisine through the words of one of its biggest champions." -- Epicurious

”Lundy is a warm and charming guide with a deep-seated love and respect for the region and its approach to cuisine. Fans of locally sourced foods and Southern cooking will find a lot to like here, as Lundy does a terrific job of showcasing Appalachia’s breadth and depth.” --Publishers Weekly

“Perhaps the finest book ever about mountain food.” --The Bitter Southerner

"Long after the plates are cleaned and the dishes washed, I’ll return to this book for the stories. Lundy on Appalachia is like Edna Lewis on Virginia... Her voice brims with grace and good humor. She is a marvel, and “Victuals” her masterpiece." --Wendell Brock, Atlanta Journal-Constitution

"A loving portrait of Appalachian food, past and future"-- Epicurious

"The recipes in Victuals are appealing enough to have begun making their way into my repertoire -- an August experiment with her dead-simple recipe for cornbread led to my eating a whole pan of it within 24 hours.  But it's the nuanced glimpse the book offers of Appalachia, both poor and rich, supportive and combative, that I imagine will stick with me." --National Geographic

In her new book Victuals: An Applachian Journey, with Recipes -- you may pronounce it "vittles" -- the Asheville-based author tells the story of a region.  Her region.  The one she explored growing up and as an itinerant chronicler of Appalachian culture." --USA Today

"Four thousand miles Lundy drove for her new book, gathering tales, recipes and anecdotes. It's a journey that comes alive in color far more vivid than those images you'll often see, the kind that paint Appalachia as a backwater monoculture." --USA Today

"To call it a cookbook seems almost unfair. This is not just a collection of recipes or, as so many cookbooks these days are, a "branding opportunity" for an aspiring chef.  In Victuals -- which the book's cover makes clear is pronounced "viddles" -- Lundy has written a love letter to the foods, culture, and fortitude of Appalachian people." --Washington Post

"Part reminiscence, part living history, Victuals (right on the book cover, Lundy stresses that the word is pronounced “vi-dls”) would be an important study of southern Appalachia even without the 80 recipes that illustrate the region’s culinary diversity." --Chicago Tribune

"Victuals is a breathtaking work of literature that sneaks up on you, casts a spell, and corrects your misconceptions; it’s a cookbook less about cook and more book."--The A.V. Club