Don't Sweat the Small Stuff . . . and It's All Small Stuff: Simple Ways to Keep the Little Things from Taking Over Your Life (Paperback) 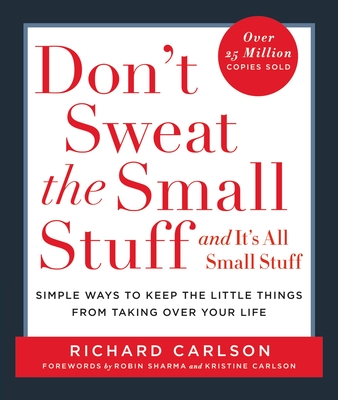 Don't Sweat the Small Stuff . . . and It's All Small Stuff: Simple Ways to Keep the Little Things from Taking Over Your Life (Paperback)


Not Currently On Our Shelves. Usually Ships in 1-5 Days.
Featured in Don't Sweat the Small Stuff: The Kristine Carlson Story starring Heather Locklear, premiering on Lifetime

Put challenges in perspective, reduce stress and anxiety through small daily changes, and find the path to achieving your goals with this groundbreaking inspirational guide—a self-help classic.
​
Don't Sweat the Small Stuff...and It's All Small Stuff is a book that tells you how to keep from letting the little things in life drive you crazy. In thoughtful and insightful language, author Richard Carlson reveals ways to calm down in the midst of your incredibly hurried, stress-filled life.

You can learn to put things into perspective by making the small daily changes Dr. Carlson suggests, including advice such as "Choose your battles wisely"; "Remind yourself that when you die, your 'in' box won't be empty"; and "Make peace with imperfection". With Don't Sweat the Small Stuff... you'll also learn how to: With gentle, supportive suggestions, Dr. Carlson reveals ways to make your actions more peaceful and caring, with the added benefit of making your life more calm and stress-free.
During his life, Richard Carlson, Ph.D, was considered one of the foremost experts in happiness and stress reduction in the United States and around the world and was a frequent featured guest on many national television and radio programs. Don't Sweat the Small Stuff continued to be a publishing phenomenon with over twenty titles in the brand franchise, two of which were co-authored and authored with his beloved wife, Kris. He died of a pulmonary embolism in December 2006, at the age of forty-five.
"Over a decade of positive psychology research seems to validate what we learned twenty years ago from Don't Sweat the Small Stuff. . . . These wonderful books help break down and simplify how to achieve that happiness."—Shawn Achor, bestselling author of The Happiness Advantage

"After almost two decades since the original release of Don't Sweat the Small Stuff, Richard Carlson's insights on the meaning of life continue to be timeless. The book teaches us to focus on the 'now' and find balance by living through contentment."—Deepak Chopra

"Don't Sweat the Small Stuff has the power to change our individual and collective lives. I am deeply grateful to Dr. Richard Carlson and his beloved wife Kristine for their wisdom and compassion in bringing transformational practices and perspectives to millions of readers."—Shauna Shapiro, author of The Art and Science of Mindfulness

"Richard Carlson caused a revolution in all our thinking with his Don't Sweat the Small Stuff books. He was like a Zen master in disguise, taking almost an aw-shucks attitude toward shifting the culture."—Marianne Williamson, New York Times bestselling author of A Return to Love