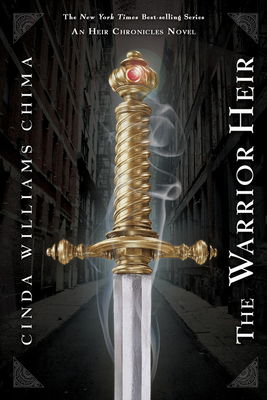 This is book number 1 in the The Heir Chronicles series.

A teen from Ohio discovers he's the last in a long line of magical warriors chosen to fight to the death.

Before he knew about the Roses, sixteen-year-old Jack lived an unremarkable life in the small Ohio town of Trinity. Only the medicine he has to take daily and the thick scar above his heart set him apart from the other high-schoolers. Then one day Jack skips his medicine. Suddenly, he is stronger, fiercer, and more confident than ever before. And it feels great—until he loses control and nearly kills another player during soccer team tryouts.

Soon, Jack learns the startling truth about himself: He is Weirlind, part of an underground society of magical people living among us. At the head of this magical society sit the feuding houses of the Red Rose and the White Rose, whose power is determined by playing The Game: a magical tournament in which each house sponsors a warrior to fight to the death.

As if his bizarre magical heritage weren't enough, Jack finds out that he's not just another member of Weirlind—he's one of the last of the warriors, at a time when both houses are scouting for a player. Can he learn to control his magic and fight off the Wizards who would claim him? Find out in the first book in the epic Heir Chronicles series by New York Times and USA Today bestselling author Cinda Williams Chima!
New York Times and USA Today bestselling author Cinda Williams Chima grew up with talking animals and kick-butt Barbies. She began writing poetry and stories in third grade and novels in junior high school. These days she writes fantasy fiction for teens of all ages. Her Heir Chronicles contemporary fantasy series includes The Warrior Heir, The Wizard Heir, The Dragon Heir, The Enchanter Heir, and The Sorcerer Heir.

Her high fantasy Seven Realms series launched with The Demon King, followed by The Exiled Queen, The Gray Wolf Throne, and The Crimson Crown; she is also the author of the Shattered Realms series, including Flamecaster, Shadowcaster, Stormcaster, and Deathcaster, among other works. She lives in Ohio with her family, and invites you to visit her online at cindachima.com.
"Twists and turns abound in this remarkable, nearly flawless debut novel that mixes a young man's coming-of-age with fantasy and adventure. Fast paced and brilliantly plotted."—VOYA

"Fans of action/adventure fantasy, and even videogames will find this an absorbing read."—BCCB

"The story cleverly entwines ancient magic and contemporary adolescence in a coming-of-age story that works on both levels."—KLIATT