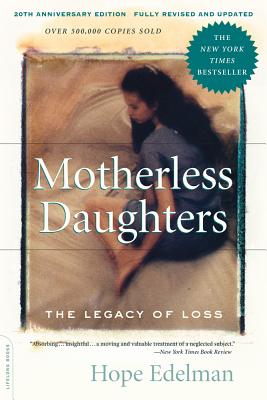 
Not Currently On Our Shelves. Usually Ships in 1-5 Days.
The classic New York Times bestseller that has helped millions of women cope with and heal from the grief of losing their mothers

Although a mother's mortality is inevitable no book has discussed the profound lasting and far reaching effects of this loss until Motherless Daughters, which became an instant classic. More than twenty years later, it is still the go-to book that women of all ages look to for comfort, help, and understanding when their mother dies. Building on interviews with hundreds of mother loss survivors, Edelman's personal story of losing her mother, and recent research in grief and psychology, Motherless Daughters reveals the shared experiences and core identity issues of motherless women:

Hope Edelman is the internationally acclaimed author of five nonfiction books, including the bestsellers Motherless Daughters and Motherless Mothers, as well as the memoir The Possibility of Everything. She has lectured extensively on the subjects of early mother loss and nonfiction writing.

Her articles and reviews have appeared in numerous publications, including the New York Times, the Washington Post, the Huffington Post, Real Simple, and Parents. Her work has received a New York Times notable book of the year designation and a Pushcart Prize for creative nonfiction. She lives in Topanga Canyon, California, with her husband and their two daughters. hopeedelman.com
"A go-to manual for weathering grief."—Salon.com

"Edelman's landmark book...is an exploration of what it means to lose your mother, at every stage of development, through testimonies of the women who survived these losses."—Bustle