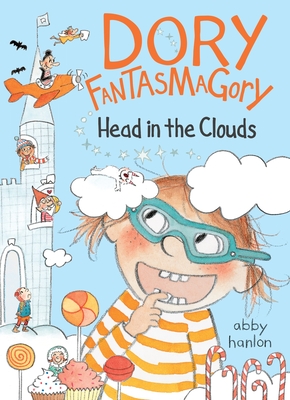 This is book number 4 in the Dory Fantasmagory series.

Dory has her first loose tooth, and, with her usual over-the-top excitement, she cannot stop talking about the tooth fairy. Naturally, this drives her brother and sister crazy. But it also sparks a serious jealous streak in her nemesis, Mrs. Gobble Gracker, who wants all of Dory's attention to herself.

But Mrs. Gobble Gracker has decided to steal the tooth fairy's job, and flying around in a tutu from Rosabelle, she heads for Dory's house. It's time for Dory to come up with a serious plan to get the tooth fairy her job back.

The fourth installment in the wildly popular Dory Fantasmagory series delivers laughs on every page as Dory teams up with her pals, real and imaginary, to save the tooth fairy for all the world's children--and get her dollar!
Abby Hanlon has taught creative writing and first grade in the New York City public school system. Inspired by her students' storytelling and drawings, Abby began to write her own stories for children, and taught herself to draw after not having drawn since childhood.
Praise for Dory Fantasmagory: Head in the Clouds

"Many series for fledgling readers feature mischievous girls and their grade-school exploits: Ramona Quimby, Junie B. Jones and Clementine, to name a few. Others, like the Magic Treehouse books, send children on fantasy adventures. Abby Hanlon’s marvelous Dory Fantasmagory series, featuring the plucky heroine Dory, also known as Rascal, combines the two . . . There is, as always, much to laugh over." —The New York Times

"The family dynamics are entirely believable, and both adult and child readers can appreciate the humor." —Kirkus Reviews


Praise for the Dory Fantasmagory series:

* "Hanlon’s hilarious narration and cartooning reveal an uncanny talent for getting into the mile-a-minute mind of a one-of-a-kind girl." —Publishers Weekly, starred review of Dory Fantasmagory: The Real True Friend

"Dory is as likable a kid heroine as I’ve encountered in a decade." —The Boston Globe on Dory Fantasmagory: The Real True Friend

"An especially wonderful book to share with reluctant readers . . . I can’t imagine a book more calculated to reinforce the power of reading and becoming a reader than Dory Dory Black Sheep. It is a true triumph." —Publishers Weekly ShelfTalker on Dory Fantasmagory: Dory Dory Black Sheep

"Hanlon has a winning way with the story’s characters (real and imaginary) and dialogue." —Booklist on Dory Fantasmagory: Dory Dory Black Sheep