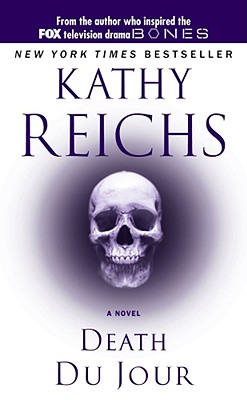 This is book number 2 in the A Temperance Brennan Novel series.

Forensic anthropologist Kathy Reichs exploded onto bestseller lists worldwide with her phenomenal debut novel Déjà Dead -- and introduced "[a] brilliant heroine" (Glamour) in league with Patricia Cornwell's Kay Scarpetta. Dr. Temperance Brennan, Quebec's director of forensic anthropology, now returns in a thrilling new investigation into the secrets of the dead.
In the bitter cold of a Montreal winter, Tempe Brennan is digging for a corpse buried more than a century ago. Although Tempe thrives on such enigmas from the past, it's a chain of contemporary deaths and disappearances that has seized her attention -- and she alone is ideally placed to make a chilling connection among the seemingly unrelated events. At the crime scene, at the morgue, and in the lab, Tempe probes a mystery that sweeps from a deadly Quebec fire to startling discoveries in the Carolinas, and culminates in Montreal with a terrifying showdown -- a nerve-shattering test of both her forensic expertise and her skills for survival.
Kathy Reichs’s first novel Déjà Dead, published in 1997, won the Ellis Award for Best First Novel and was an international bestseller. The Bone Code is Kathy’s twentieth entry in her series featuring forensic anthropologist Temperance Brennan. Kathy was also a producer of Fox Television’s longest running scripted drama, Bones, which is based on her work and her novels. One of very few forensic anthropologists certified by the American Board of Forensic Anthropology, Kathy divides her time between Charlotte, North Carolina, and Montreal, Québec. Visit her at KathyReichs.com or follow her on Twitter @KathyReichs.
"Atmospheric, suspensefully paced.... a delectable tale of corpus delicti...bone-chilling prime crime."

"Brennan is a winner, and so is Reichs."