No Plan B: A Jack Reacher Novel (CD-Audio) 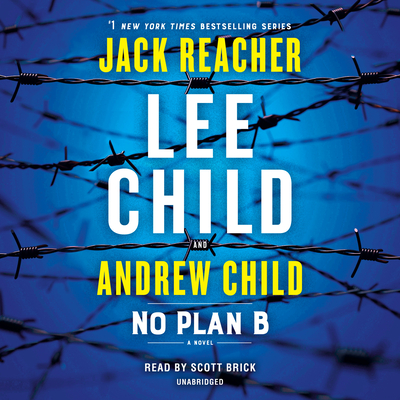 No Plan B: A Jack Reacher Novel (CD-Audio)

This is book number 27 in the Jack Reacher series.

“No Plan B is not to be missed. A perfectly plotted, fast-paced thriller, with bigger twists than ever before. It’s no wonder Jack Reacher is everyone’s favorite rebel hero.”—Karin Slaughter

In Gerrardsville, Colorado, a woman dies under the wheels of a moving bus. The death is ruled a suicide. But Jack Reacher saw what really happened: A man in a gray hoodie and jeans, moving stealthily, pushed the victim to her demise—before swiftly grabbing the dead woman’s purse and strolling away.

When another homicide is ruled an accident, Reacher knows this is no coincidence. With a killer on the loose, Reacher has no time to waste to track down those responsible.

But Reacher is unaware that these crimes are part of something much larger and more far-reaching: an arsonist out for revenge, a foster kid on the run, a cabal of powerful people involved in a secret conspiracy with many moving parts. There is no room for error, but they make a grave one. They don’t consider Reacher a threat. “There’s too much at stake to start running from shadows.” But Reacher isn’t a shadow. He is flesh and blood. And relentless when it comes to making things right.

For when the threat is Reacher, there is No Plan B.
Lee Child is the author of twenty-six New York Times bestselling Jack Reacher thrillers, with seventeen having reached the #1 position, and the #1 bestselling complete Jack Reacher story collection, No Middle Name. Foreign rights in the Reacher series have sold in one hundred territories. A native of England and a former television director, Lee Child lives in New York City and Wyoming.

Andrew Child, who also writes as Andrew Grant, is the author of RUN, False Positive, False Friend, False Witness, Invisible, and Too Close to Home. Child and his wife, the novelist Tasha Alexander, live on a wildlife preserve in Wyoming. He is the #1 bestselling co-author of the Jack Reacher novels The Sentinel and Better Off Dead.
Praise for No Plan B

“The ‘Child’ brothers keep powering along, and their collaboration is bringing a new energy to the beloved Jack Reacher series (which is also flush with new fans in the wake of the hit adaptation). No Plan B has all the staples we’ve come to appreciate: a smalltown, arrived to seemingly at random, but soon Reacher finds a conspiracy unfolding, as a series of ‘accidental’ deaths have something more sinister behind them. Reacher, naturally, will apply brutal reason (and other brutal forces) to find his way into the depths of this small town’s corrupt soul.”—CrimeReads

“No Plan B is one of the best Reacher books in years.”—TheRealBookSpy

“Who could ask for more?” —Publishers Weekly

“Fans who come for the action . . . will not be disappointed. . . . A grimly efficient addition to the Reacher canon.”—Kirkus Reviews

“No Plan B is not to be missed. It is a perfectly plotted, fast-paced thriller, with bigger twists than ever before. It’s no wonder Jack Reacher is everyone’s favorite rebel hero.”—Karin Slaughter

“Lee and Andrew Child nail it again with No Plan B.”—Richard Osman

“The world’s favorite hero packs an even harder punch than ever.”—Peter James

Praise for the Jack Reacher series

“The truth about Reacher gets better and better. . . . This series [is] utterly addictive.”—Janet Maslin, The New York Times

“Jack Reacher is today’s James Bond, a thriller hero we can’t get enough of. I read every one as soon as it appears.”—Ken Follett

“Reacher is the stuff of myth. . . . One of this century’s most original, tantalizing pop-fiction heroes.”—The Washington Post

“The Reacher novels are easily the best thriller series going.”—NPR

“Reacher is a man for whom the phrase moral compass was invented: His code determines his direction. . . . You need Jack Reacher.”—The Atlantic

“I pick up Jack Reacher when I’m in the mood for someone big to solve my problems.”—Patricia Cornwell

“[A] feverishly thrilling series . . . You can always count on furious action.”—Miami Herald