Every Day: The Graphic Novel (Paperback) 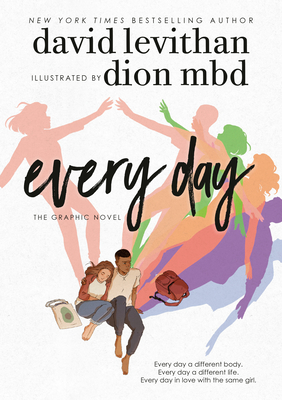 Every Day: The Graphic Novel (Paperback)


Coming Soon - Available for Pre-Order Now
A graphic novel adaptation of the groundbreaking, beloved New York Times–bestselling novel about a teen who wakes up in a different body each day and the love that eludes them.

There’s never any warning about where it will be or who it will be. A has made peace with that—even established guidelines by which to live: Never get too attached. Avoid being noticed. Do not interfere.

It’s all fine until the morning that A wakes up in the body of Justin and meets Justin’s girlfriend, Rhiannon. From that moment, the rules by which A has been living no longer apply. Because finally A has found someone they want to be with—day in, day out, day after day. But can Rhiannon love someone who is destined to change every day?

For the first time on the page, A's epic story will be brought to life as a graphic novel, with illustrations by Dion MBD.
David Levithan is a children’s book editor in New York City and the author of several books for young adults, including Lambda Literary Award winner Two Boys Kissing; Nick & Norah’s Infinite Playlist and Dash & Lily’s Book of Dares (co-authored with Rachel Cohn); Take Me with You When You Go (co-authored with Jennifer Niven); Will Grayson, Will Grayson (co-authored with John Green); and Boy Meets Boy, among many other novels for teens and kids. In 2016, David was named the recipient of the Margaret A. Edwards Award. He lives in Hoboken, New Jersey. Follow him on Twitter at @loversdiction.

Dion MBD (short for Dionisius Mehaga Bangun Djayasaputra) is an Indonesian illustrator/designer who lives and works between Brooklyn and Bandung. Dion received his illustration BFA from Ringling College of Art and Design in Florida, where he grew his fascination with clouds. In his downtime, Dion is either cooking, listening to John Mayer, or cloud-watching.