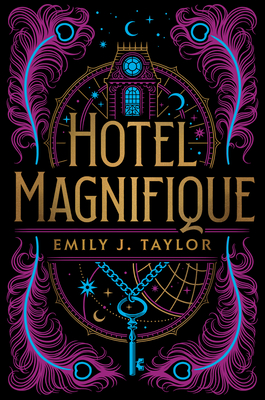 
Not Currently On Our Shelves. Usually Ships in 1-5 Days.
“Hotel Magnifique opened the door to a sumptuous and glittering world of magic and mysteries and left me enchanted. Perfect for fans of Caraval and The Night Circus.” –Erin A. Craig, New York Times bestselling author of House of Salt and Sorrows and Small Favors

Decadent and darkly enchanting, this lavish YA fantasy debut follows seventeen-year-old Jani as she uncovers the deeply disturbing secrets of the legendary Hotel Magnifique.

All her life, Jani has dreamed of Elsewhere. Just barely scraping by with her job at a tannery, she’s resigned to a dreary life in the port town of Durc, caring for her younger sister Zosa. That is, until the Hotel Magnifique comes to town.

The hotel is legendary not only for its whimsical enchantments, but also for its ability to travel—appearing in a different destination every morning. While Jani and Zosa can’t afford the exorbitant costs of a guest’s stay, they can interview to join the staff, and are soon whisked away on the greatest adventure of their lives. But once inside, Jani quickly discovers their contracts are unbreakable and that beneath the marvelous glamour, the hotel is hiding dangerous secrets.

With the vexingly handsome doorman Bel as her only ally, Jani embarks on a mission to unravel the mystery of the magic at the heart of the hotel and free Zosa—and the other staff—from the cruelty of the ruthless maître d’hôtel. To succeed, she’ll have to risk everything she loves, but failure would mean a fate far worse than never returning home.
Emily J. Taylor was born and raised in California and has since refused to stay put. She’s lived in four states and on two continents, all of which have conveniently given her an endless amount of story fodder. She currently works as a creative director in Minneapolis, where she spends the long winters dreaming up glittering worlds to spin into dark tales.  Follow her on Twitter and Instagram @emilycanwrite, or find her on her website at emilyjtaylorauthor.com.
★ “A wondrous read for anyone searching for a bit of magic.” –Kirkus Reviews, starred review

"This impressive debut novel is set in a fictional, magical version of France. The level of detail is engrossing, and the sinister touches of the hotel's secrets will keep readers hooked." –Booklist

"Taylor has built an enchanting world.  Even those who are not drawn to fantasy will enjoy this fast-paced, magical adventure." –SLJ

“Hotel Magnifique opened the door to a sumptuous and glittering world of magic and mysteries and left me enchanted. Perfect for fans of Caraval and The Night Circus.” –Erin A. Craig, New York Times bestselling author of House of Salt and Sorrows and Small Favors

“Like the hotel contained in its pages, Hotel Magnifique will sweep you away to an enchanting world filled with mystery and spectacle.” –Katy Rose Pool, author of The Age of Darkness series

“Dazzling, enchanting, and expertly crafted, with the perfect amount of gritty secrets that kept me flying through the pages. Emily J. Taylor is my new auto-buy author. The debut was impossible to put down and had me positively spellbound from start to finish.” –Adalyn Grace, New York Times bestseller of All the Stars and Teeth

“Prepare to be spellbound. Once you enter the wildly imaginative world of Hotel Magnifique, you'll never want to leave. Emily J. Taylor has spun a gem of a story.” –Joan He, New York Times bestselling author of Descendant of the Crane and The Ones We’re Meant to Find

“Hotel Magnifique is full of magic and bursting with wonder, with enough mystery to make readers devour the pages right up until the very end.” –Lynette Noni, #1 bestselling author of The Prison Healer