Mayhem in Mayberry: Misadventures of a P.I. in Southern Appalachia (Paperback) 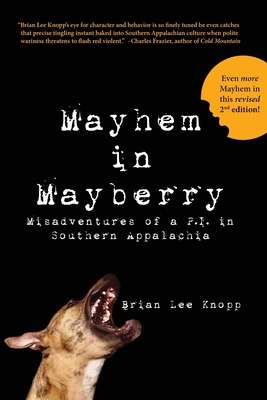 Mayhem in Mayberry: Misadventures of a P.I. in Southern Appalachia (Paperback)


On Our Shelves Now
As a licensed private investigator in western North Carolina, Brian Lee Knopp could outrun enraged pit bulls, slink unseen and unheard through the tangled forests, and find missing evidence in the bottom of a dumpster. To get the goods on his subjects, he would perch in trees, lie motionless for hours in camoflage, drive rented sports cars and U-Haul trucks, ride horses and bikes, even paddle whitewater kayaks. He could talk his way out of almost every predicament imaginable--except for how to succeed as a P.I. without failing as a human being.

Mayhem in Mayberry: Misadventures of a P.I. in Southern Appalachia is a fearless, take-no-prisoners account of P.I. culture, an unforgettable portrait of personal loss and failure, and a blistering ride through the heart of Southern Appalachia. This revised 2nd Edition features a cover redesign, a new preface, a bonus chapter with a story considered too dark to tell in the 2009 edition, and other surprises!
Brian Lee Knopp is a retired private investigator who provided legal support investigations to civil and criminal attorneys for over thirty years. A graduate of the John E. Reid Technique, the country’s preeminent interview and interrogation program, Knopp held state certifications as both a capital case investigator and sentence mitigation specialist. He wrote the 2009 best-selling memoir Mayhem in Mayberry: Misadventures of a P.I. in Southern Appalachia (Cosmic Pigbite Press). He also created and contributed to the collaborative novel Naked Came the Leaf Peeper (Burning Bush Press 2011). His 2017 personal essay detailing the August 6, 1981 takeover of central Florida’s largest rock radio station by the Ida Lupino Liberation Organization (ILLO)—Dreams I’m Never Gonna See: The Takeover of WDIZ Rock 100. A True Story—is available on Amazon (https://www.amazon.com/dp/B01MSAWM86/ ) A former professional sheep shearer with an M.A. in English Literature from the University of Texas at Austin, Knopp taught composition at Warren Wilson College and nonfiction writing for The Great Smokies Writing Program at UNC-Asheville. His nonfiction work has appeared in Stoneboat Journal, WNC Magazine, Now & Then, and The Great Smokies Review. His book reviews, essays, and poems have been published in several regional magazines and anthologies. He lives somewhere in the mountains near Asheville with his own pittie, Odin.
"Brian Lee Knopp’s eye for character and behavior is so finely tuned he even catches that precise tingling instant baked into Southern Appalachian culture when polite wariness threatens to flash red violent.”
— Charles Frazier, National Book Award winner and author of Cold Mountain

“I love this author and I love this book! Brian Lee Knopp is one of the most natural writers I’ve ever encountered and he tells this all-too-true story with sinewy wit and sublime grace. There are moments in this book where even Knopp seems filled with amazed disbelief at what he has seen, done and lived through. The best narratives should be windows into worlds that most of us will never encounter, and his world most certainly has been one of strange and intimate marvels. I feel lucky to have been let in.”
— Elizabeth Gilbert, author of Eat, Pray, Love

“Brian Lee Knopp is an American original, a fearless standup comedian, and a muckraking master of prose, whose Mayhem in Mayberry: Misadventures of a P.I. in Southern Appalachia is one of the funniest and most provocative books I’ve read in years. It’s also a breakthrough chronicle of another America, the hilarious underbelly of crime and betrayal, and the still small possibility of redemption. From the back warrens of the hip New South, to the backwoods of the disappearing American frontier, Knopp manages to unfold the secret tales known only to the best private investigator with stunning prose, and powerful insight. This incredible book conjures the spirit of Raymond Chandler’s crime classics to the Carolinas, with the brilliant timing and comic narrative of Steve Martin and David Sedaris. Mayhem in Mayberry should be an instant classic—an American classic of an undercover private investigator on the frontlines of crime and laugh-out-loud punishment.”
— Jeff Biggers, author of The United States of Appalachia

“Not since Elmore Leonard’s Maximum Bob . . . have I read a book about a PI that was as funny as it is entertaining, yet Knopp's characters and prose push this book closer to Steinbeck’s Cannery Row or its sequel Sweet Thursday. Read Mayhem in Mayberry and rediscover just how much fun a well-written, well-executed book can be.”
— Rapid River Magazine

“A few things make Knopp’s memoir of his P.I. days different and worthwhile: his fine writing skills; his love for the Appalachian landscape; his love of the often unintentional humor in the lives of those he meets; a palpable compassion for those caught in bad circumstances they don’t deserve ….”
— Creative Loafing