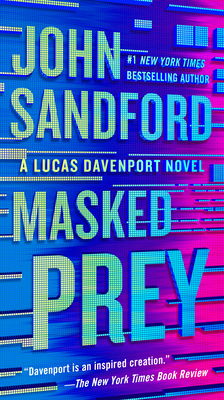 This is book number 30 in the A Prey Novel series.

Clayton Deese looks like a small-time criminal, muscle for hire when his loan shark boss needs to teach someone a lesson. Now, seven months after a job that went south and landed him in jail, Deese has skipped out on bail, and the U.S. Marshals come looking for him. They don't much care about a low-level guy--it's his boss they want--but Deese might be their best chance to bring down the whole operation.

Then, they step onto a dirt trail behind Deese's rural Louisiana cabin and find a jungle full of graves.

Now Lucas Davenport is on the trail of a serial killer who has been operating for years without notice. His quarry is ruthless, and--as Davenport will come to find--full of surprises . . .
John Sandford is the pseudonym for the Pulitzer Prize-winning journalist John Camp. He is the author of twenty-nine Prey novels; four Kidd novels; twelve Virgil Flowers novels; three YA novels coauthored with his wife, Michele Cook; and three other books.
"Addictive...Sandford always delivers rousing action scenes, but this time he's especially good on character, too....There’s enough violence to satisfy bloodthirsty tastes, enough information on neofascism to give us a chill, and enough sly humor to make American teenagers and their would-be killers sound as if English were their second language.”—Marilyn Stasio, The New York Times Book Review

"This entry in the phenomenally popular Prey series will engage longtime fans with its intricate plot and have new readers backtracking through the entire series. Thoroughly involving and very timely."—Booklist