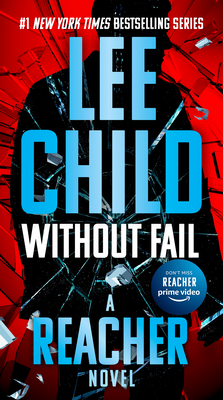 This is book number 6 in the Jack Reacher series.

Skilled, cautious, and anonymous, Jack Reacher is perfect for the job: to assassinate the vice president of the United States. Theoretically, of course. A female Secret Service agent wants Reacher to find the holes in her system, and fast—because a covert group already has the vice president in their sights. They’ve planned well. There’s just one thing they didn’t plan on: Reacher.
LEE CHILD is a #1 bestselling author worldwide. His debut novel, Killing Floor, won two awards for best first mystery and was nominated for two more. Foreign rights in the Jack Reacher series have been sold in ninety-five countries. Child, a native of England, is a former television director. He lives in New York City, where he is at work on his next Jack Reacher thriller.

“If Without Fail doesn’t hook you on Lee Child, I give up.”—The New York Times

“Everything falls into place like a well-assembled time bomb.”—The Boston Globe

“This is a knockout.”—Library Journal

“[The] plot is ingenious…This is a superior series.”—The Washington Post Book World

“If you haven’t read a Reacher story, do yourself an exciting and engrossing favor and pick one up. Grade A.”—Rocky Mountain News