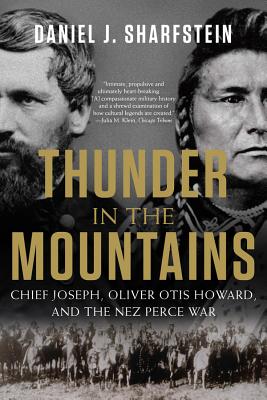 “Beautifully wrought and impossible to put down, Daniel Sharfstein’s Thunder in the Mountains chronicles with compassion and grace that resonant past we should never forget.”—Brenda Wineapple, author of Ecstatic Nation: Confidence, Crisis, and Compromise, 1848–1877

After the Civil War and Reconstruction, a new struggle raged in the Northern Rockies. In the summer of 1877, General Oliver Otis Howard, a champion of African American civil rights, ruthlessly pursued hundreds of Nez Perce families who resisted moving onto a reservation. Standing in his way was Chief Joseph, a young leader who never stopped advocating for Native American sovereignty and equal rights. Thunder in the Mountains is the spellbinding story of two legendary figures and their epic clash of ideas about the meaning of freedom and the role of government in American life.

Daniel J. Sharfstein is a professor of law and history at Vanderbilt University and a 2013 Guggenheim Fellow. His first book, The Invisible Line: A Secret History of Race in America, received the J. Anthony Lukas Prize. He lives in Nashville.
Magnificent and tragic.… Sharfstein is a wonderful storyteller with a deep knowledge of all the relevant source material from the period. His narrative is rich with fascinating historical details.
— Nick Romeo - Christian Science Monitor

A brisk narrative of one of the last major collisions between Native Americans and white America. [Sharfstein’s] two main characters are complex and compelling—Chief Joseph, a thoughtful, powerful speaker who spent years trying to find a way for his people to live alongside American settlers, and General O.O. Howard, a moralistic liberal Army general whose fate it was to crush Joseph’s small Nez Perce tribe.
— Thomas E. Ricks - New York Times Book Review

An excellent new book.… Many of us shake our heads endlessly at the shabby treatment our ancestors rendered on Indians even as we enjoy the lands stolen from them. Would our leaders have handled the situation that much differently today? Would we object? And how does that relate to how we now treat some other oppressed people, immigrants, including refugees fleeing war-torn countries our nation has failed to help pacify? Sharfstein raises those questions well in Thunder in the Mountains.

A thorough and well-documented work of history [that] delves into the human condition like the best fiction, offering insights not only into historical events but also into the ways people can grow and evolve.
— Memphis Commercial Appeal

Sharfstein presents his view without polemic. Indeed, the writing is lyrical—smooth and engaging, albeit with scrupulous bibliographical notes to underscore its historical authenticity.… Sharfstein shows how at each interaction with federal authorities and their texts, Joseph focused on understanding not so much the particular words as the mechanisms through which ‘authoritative’ documents were created, trying to find his way in the wilderness of American power.
— Peter d’Errico - Indian Country Today

An important book that will doubtless enjoy a broad readership among the general public and should be read by students as well as specialists interested in the Civil War era, military history, the history of the American West, and indigenous studies.
— Pacific Northwest Quarterly

Brilliant… a timeless parable of two pious men who served, led and fought with honor and dignity for their nation’s causes.… Sharfstein’s Thunder in the Mountains will resonate loudly and remind readers that basic human rights in a democracy should never be taken for granted.

A good post–Independence Day read in the sense that it really does show the scope of U.S. power, who makes certain decisions about the rights of native peoples, the meaning of liberty and equality and its relationship to ethnicity, color, place, and class.
— Dana Williams - The Takeaway

Daniel Sharfstein offers a searing account of an American tragedy: how Oliver Otis Howard, a champion for the rights of freed slaves, became an architect of the dispossession and subjugation of Native people. This beautifully written book will change the way readers think about the era of Civil War and Reconstruction.
— Ari Kelman, author of A Misplaced Massacre: Struggling Over the Memory of Sand Creek