When the Emperor Was Divine (Paperback) 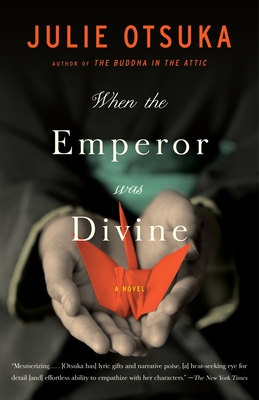 When the Emperor Was Divine (Paperback)


Not Currently On Our Shelves. Usually Ships in 1-5 Days.
From the bestselling, award-winning author of The Buddha in the Attic and The Swimmers, this commanding debut novel paints a portrait of the Japanese American incarceration camps that is both a haunting evocation of a family in wartime and a resonant lesson for our times.

On a sunny day in Berkeley, California, in 1942, a woman sees a sign in a post office window, returns to her home, and matter-of-factly begins to pack her family's possessions. Like thousands of other Japanese Americans they have been reclassified, virtually overnight, as enemy aliens and are about to be uprooted from their home and sent to a dusty incarceration camp in the Utah desert.

In this lean and devastatingly evocative first novel, Julie Otsuka tells their story from five flawlessly realized points of view and conveys the exact emotional texture of their experience: the thin-walled barracks and barbed-wire fences, the omnipresent fear and loneliness, the unheralded feats of heroism. When the Emperor Was Divine is a work of enormous power that makes a shameful episode of our history as immediate as today's headlines.

Don’t miss Julie Otsuka’s bestselling new novel, The Swimmers.
JULIE OTSUKA was born and raised in California. She is a recipient of a Guggenheim Fellowship, and her first novel, When the Emperor Was Divine won the 2003 Asian American Literary Award and the 2003 American Library Association Alex Award. Her second novel, The Buddha in the Attic, was a finalist for the National Book Award 2011 and won the 2012 PEN/Faulkner Award for Fiction and the 2011 Langum Prize in American Historical Fiction. The Buddha in the Attic was an international bestseller and the winner of the prestigious Prix Femina étranger 2012, and the Albatros Literaturpreis 2013. She lives in New York City.
“[Otsuka's] voice never falters, equally adept at capturing horrific necessity and accidental beauty. Her unsung prisoners of war contend with multiple front lines, and enemies who wear the faces of neighbors and friends. It only takes a few pages to join their cause, but by the time you finish this exceptional debut, you will recognize that their struggle has always been yours.” —Colson Whitehead, author of The Underground Railroad and The Nickel Boys

"Mesmerizing ... [Otsuka has] lyric gifts and narrative poise, [a] heat-seeking eye for detail [and] effortless ability to empathize with her characters."—The New York Times

“Prose so cool and precise that it’s impossible not to believe what [Otsuka] tells us or to see clearly what she wants us to see. . . . A gem of a book and one of the most vivid history lessons you’ll ever learn.” –USA Today

“With a matter-of-fact brilliance, and a poise as prominent in the protagonist as it is in the writing, When the Emperor Was Divine is a novel about loyalty, about identity, and about being other in America during uncertain times.” –Nathan Englander, author of For the Relief of Unbearable Urges

“Shockingly brilliant. . . . it will make you gasp . . . Undoubtedly one of the most effective, memorable books to deal with the internment crisis . . . The maturity of Otsuka’s. . . prose is astonishing.” — The Bloomsbury Review

“The novel’s voice is as hushed as a whisper. . . . An exquisite debut. . . potent, spare, crystalline.” –O, The Oprah Magazine

“At once delicately poetic and unstintingly unsentimental.” --St. Petersburg Times

“Heartbreaking, bracingly unsentimental. . . .rais[es] the specter of wartime injustice in bone-chilling fashion. . . . The novel’s honesty and matter-of-fact tone in the face of inconceivable injustice are the source of its power. . . . Dazzling.” –Publishers Weekly

“Otsuka . . . demonstrates a breathtaking restraint and delicacy throughout this supple and devastating first novel .” –Booklist