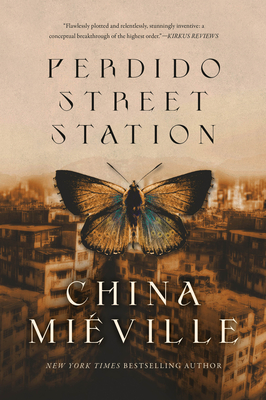 This is book number 1 in the Bas-Lag series.

WINNER OF THE AUGUST DERLETH AND ARTHUR C. CLARKE AWARDS • A masterpiece brimming with scientific splendor, magical intrigue, and fierce characters, from the author who “has reshaped modern fantasy” (The Washington Post)

“[China Miéville’s] fantasy novels, including a trilogy set in and around the magical city-state of New Crobuzon, have the refreshing effect of making Middle-earth seem plodding and flat.”—The New York Times

The metropolis of New Crobuzon sprawls at the center of the world. Humans and mutants and arcane races brood in the gloom beneath its chimneys, where the river is sluggish with unnatural effluent and foundries pound into the night. For a thousand years, the Parliament and its brutal militias have ruled over a vast economy of workers and artists, spies and soldiers, magicians, crooks, and junkies.

Now a stranger has arrived, with a pocketful of gold and an impossible demand. And something unthinkable is released.

The city is gripped by an alien terror. The fate of millions lies with a clutch of renegades. A reckoning is due at the city’s heart, in the vast edifice of brick and wood and steel under the vaults of Perdido Street Station.

It is too late to escape.
China Miéville is the author of numerous books, including This Census-Taker, Three Moments of an Explosion, Railsea, Embassytown, Kraken, The City & The City, and Perdido Street Station. His works have won the World Fantasy Award, the Hugo Award, and the Arthur C. Clarke Award (three times). He lives and works in London.
“Primal awe and erudite references have always mingled in Miéville’s work—along with a healthy dose of pulp playfulness.”—The New Yorker

“Perdido Street Station is brimming with enchantment. Written in intense, evocative prose, set in Dickensian New Crobuzon, peopled with characters of Boschian demeanor and diversity . . . the book flourishes and shuffles the conventions of science fiction, fantasy, and horror.”—Tordotcom