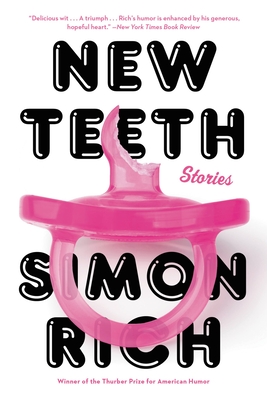 
Not Currently On Our Shelves. Usually Ships in 1-5 Days.
Laugh till you cry in this new collection of stories from the award-winning “Serena Williams of humor writing” (New York Times Book Review) about raising babies and trying  not to be one.

Called a “comedic Godsend” by Conan O’Brien and “the Stephen King of comedy writing” by John Mulaney, Simon Rich is back with New Teeth, his funniest and most personal collection yet.

Two murderous pirates find a child stowaway on board and attempt to balance pillaging with co-parenting. A woman raised by wolves prepares for her parents’ annual Thanksgiving visit. An aging mutant superhero is forced to learn humility when the mayor kicks him upstairs to a desk job. And in the hard-boiled caper “The Big Nap,” a weary two-year-old detective struggles to make sense of “a world gone mad.”

Equal parts silly and sincere, New Teeth is an ode to growing up, growing older, and what it means to make a family.
Simon Rich is a frequent contributor to The New Yorker. He has written for Saturday Night Live, Pixar, and The Simpsons and is the creator of the TV shows Man Seeking Woman and Miracle Workers, which he based on his books. His other collections include Ant Farm, Spoiled Brats, and Hits and Misses, which won the 2019 Thurber Prize for American Humor. He lives in Los Angeles with his family.
"Rich presents parody, absurdity, observational wit, the sudden shift in a familiar premise, and a surprising touch of sweetness and charm throughout... [New Teeth is] so consistently funny, so exceptional in its imaginative use of parody as to be near genius. A fertile mind provides many smiles in this entertaining collection—and more than a few out-loud laughs."—Kirkus Starred Review

"With the riotous New Teeth, Rich once again sets out to tackle a universal topic: growing up. Rich provides some hilarious insights into parenting in short stories like “Learning The Ropes,” which sees a pair of pirates co-parent an adorable little stowaway. He questions an aging man’s relevance in a story about a superhero put on desk duty, and tells a biting story of found family in “Raised By Wolves.” As he comes to terms with being a dad, Rich doesn’t lose his touch for fantastical constructs that tap into all-too-real feelings."—AV Club

A triumph of sustained humor…. Rich’s humor is enhanced by his generous, hopeful heart…. Analyzing why it’s so pleasurable to read Simon Rich is about as helpful as analyzing why it’s so fun to spend the night with an unexpectedly excellent blind date. It’s better to do it than to talk about it. —Sarah Lyall, NYT Book Review

"Every new arrival from Simon Rich, a former SNL writer whose works inspired the series Man Seeking Woman and Miracle Workers, is cause for celebration. His long short stories are often high concept with premises that anyone else would make corny and cringy. He is unfailingly, unselfconsciously clever, with joy permeating his work."—Vulture

"This is Rich’s singular style: combining otherworldly plots with contemporary reference and verbiage that propel a reader forward to see what in the hell he comes up with next….The majority of Rich’s stories contain morals that are never planted too deeply for a reader to spot, making this work as instructive as it is imaginative. But it is his rich display of playfulness that lets us know that we are in the hands of a writer who has never lost the love of storytelling."—NYTBR Editors' Choice selection

There are laugh-out-loud moments in NEW TEETH, to be sure, but there are also moments of quietly witty introspection or reflection...The only question for readers is if you swallow this collection whole, or bite off bits and pieces to savor every time you need a little levity.—Book Reporter