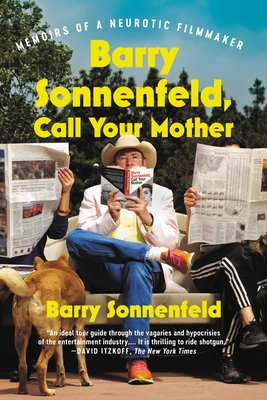 There’s a Spanish saying, “Al pan, pan y al vino, vino.” This “dicho” or saying means that one should speak frankly and with clarity about the subject at hand. Director, producer, and cinematographer Barry Sonnenfeld’s memoir, Barry Sonnenfeld, Call Your Mother, does this like no other filmmaker’s or actor’s autobiography I’ve read. It’s a cringer, but that’s how I like it, too! I realized that much of what I hear and read in popular culture and mainstream media is packaged so as to avoid the unvarnished truth. Perhaps the varnish looks prettier and sells more products or ideas or people. Additionally, directness feels, well, too direct.

Sonnenfeld, director of Men in Black, Men in Black II, Get Shorty, Addams Family, and Wild, Wild, West, discusses his unusual childhood and how he inadvertently became a filmmaker. I didn’t know I knew him. As a cinematographer, he has also been connected to many important films, for example, Blood Simple, Raising Arizona, Big, When Harry Met Sally..., and Misery.

Sonnenfeld attended film school to avoid getting a job. In a recent interview he said, “I went to [New York University] graduate film school literally only because it kept me out of the job market for three additional years. I had no interest in film.” His plan was to become a still photographer, but he discovered that he was good at cinematography. This is how he landed his first professional shoot. I’ve never encountered a more harrowing description of a porn film shoot, actually nine films made over the same weekend in a loft in New York City. His description is unsparing. I never understood how important good lighting is until now.

Sonnenfeld also names names on many of the film sets. He developed a strong working relationship with Will Smith, even though the making of Wild, Wild West hardly went as planned. Penny Marshall told him he wasn’t a very good cinematographer and tried to fire him from her film, but the production company wouldn’t let her. He says Marshall also thought Tom Hanks wasn’t a very good actor, but the film turned out to be a good one anyway. Here we’re talking about the film Big.

Recently, he appeared on Alec Baldwin’s radio show, Here’s The Thing, which I highly recommend. It doesn’t give away much, and you’ll get a sense of Sonnenfeld’s tender quirkiness. He has his own brand of neurotic humor, too. When he survived a 1999 plane crash, he said, “The weird thing is that I hate to fly, and the quote that I give people is that every time I get off a plane, I view it as a failed suicide attempt." To prove that his story of that crash is true, he includes the NTSB recording from the black box, which has the co-pilot saying things like, 'Yee, haw,' and 'I don't think we're going to make it.'

You never know where Sonnenfeld will take you in this memoir. I couldn’t anticipate his choices. It’s a book for film lovers, for those who enjoy nonfiction, and for people who want to know how the film industry really works. Get ready for the close up.

This outrageous and hilarious memoir follows a film and television director’s life, from his idiosyncratic upbringing to his unexpected career as the director behind such huge film franchises as The Addams Family and Men in Black.

Barry Sonnenfeld's philosophy is, "Regret the Past. Fear the Present. Dread the Future." Told in his unmistakable voice, Barry Sonnenfeld, Call Your Mother is a laugh-out-loud memoir about coming of age. Constantly threatened with suicide by his over-protective mother, disillusioned by the father he worshiped, and abused by a demonic relative, Sonnenfeld somehow went on to become one of Hollywood's most successful producers and directors.

Though Sonnenfeld had no ambition to direct, Scott Rudin convinced him to be the director of The Addams Family. It was a successful career move. He went on to direct many more films and television shows. Will Smith once joked that he wanted to take Sonnenfeld to Philadelphia public schools and say, "If this guy could end up as a successful film director on big budget films, anyone can." This book is a fascinating and hilarious roadmap for anyone who thinks they can't succeed in life because of a rough beginning.

Barry Sonnenfeld is a filmmaker and writer who broke into the film industry as the cinematographer on the Coen Brothers' first three films: Blood Simple, Raising Arizona, and Miller's Crossing. He also was the director of photography on Throw Mamma from the Train, Big, When Harry Met Sally, and Misery. Sonnenfeld made his directorial debut with The Addams Family in 1991, and has gone on to direct a number of films including Addams Family Values, Get Shorty, and the first three Men in Blacks. His television credits include Pushing Daisies, for which he won an Emmy, Netflix's A Series of Unfortunate Events, and most recently Apple TV+'s Schmigadoon.

"[Sonnenfeld's] moments of self-effacement...make him an ideal tour guide through the vagaries and hypocrisies of the entertainment industry.... He catalogs his own anxieties at length, sometimes to exorcise them and sometimes to fetishize them.... It is thrilling to ride shotgun."—David Itzkoff, The New York Times

"If I went to prison, and I saw that Barry Sonnenfeld was going to be my cellmate, I would think, 'Oh, this will be a breeze.'"—Jerry Seinfeld

"The extraordinary thing about Barry is how many truly strange and amazing chapters he's had in his life."—Neil Patrick Harris

"Writing a book this sharp, [Sonnenfeld is] puncturing the myth of the Director as God....A wild account of his life and times....Here we have not only a new entrant in the movie-director memoir genre but an even rarer beast: a book by someone in the entertainment industry who is neither self-aggrandizing nor self-important but uniquely, and painfully, candid."—The Wall Street Journal

“An engaging storyteller…. In his memoir, Sonnenfeld is both hilarious and tragic…. Somehow the combination works: Sonnenfeld’s breezy style engages us and makes us believe, as Will Smith has joked, that if Barry Sonnenfeld can be a director, anyone can.”—Jeremy Hobson, NPR's "Here and Now"

"Barry's memoir is amazingly honest and brazenly hilarious. Now excuse me, I need to take a shower and try to get some of those images out of my head."—Cheryl Hines

"Anyone who has encountered Barry for any length of time has wondered how he came to be the way he is. The answer is hilariously, poignantly, and forthrightly told through various stories that resulted in me feeling nauseous, laughing out loud, blushing, and repeatedly saying under my breath, 'Oh my God, Barry.' Sometimes all of those things at once."—Allison Williams

"Barry Sonnenfeld's memoir is not unlike many of his films. It's an incredible story about an unlikely hero. There is action, adventure, comedy, horror-and just a little bit of porn."—Kelly Ripa

"Hilarious, full of heart, and there are no typos."
—Max Greenfield

"I couldn't put it down."
—Marc Maron

"The most purely enjoyable memoir I've ever read. The content of this neurotic genius's life is fascinating, complimented by his rare gift of storytelling."
—Patrick Warburton

"Exactly everything a good memoir should be."—Audible Editorial

"Outrageous and hilarious...written with poignant insight and real-life irony."—KATU AM Northwest

"His utter lack of sentiment when it comes to his achievements makes for a tonic against the typical showbiz-dreamer's success story. It is also a very, very funny book....Sonnenfeld is a portraitist with an ironic sense of humour some would call quintessentially Jewish, and he can't help but find the humanity and hilarity in the horrorshows...uniquely insightful."—Film Freak Central

"Funny, wry, and thoroughly entertaining memoir. Sonnenfeld is, above all, a storyteller."—Bookpage

"Sonnenfeld makes his debut as a memoirist with a brisk, funny recounting of his improbable rise to fame in the movie world...Zesty anecdotes about family, marriage, and fatherhood combine with Hollywood gossip to make for an entertaining romp."—Kirkus Reviews

"The voice of Barry Sonnenfeld, Call Your Mother is one for this moment...chock full of humor and pathos."—The Jewish News

"His powers of exposition are impressive....This is both a serious and a comical book--sort of like Sophie's Choice, only funnier."—The East Hampton Star

"Sonnenfeld leavens his many struggles with a substantial dose of humor. He might have endured much, but Barry Sonnenfeld, Call Your Mother: Memoirs of a Neurotic Filmmaker reveals Sonnenfeld to be a survivor. It's also a testament to how the rivers of fate can push you in unexpected directions....Sonnenfeld comes up with a wealth of entertaining stories....Revel in the ruminations of a man whose youthful traumas seared but didn't scar him."—Book & Film Globe

"One of the funniest books I've ever read in my life."—Holly Firfer, CNN First Reads