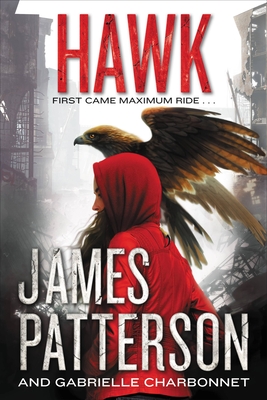 This is book number 1 in the Maximum Ride: Hawk series.

In this dark dystopian tale, 17-year-old Hawk is growing up hard and fast in post-apocalyptic New York City—until a perilous destiny forces her to take flight and protect her home.

Where is Maximum Ride?

Ten years ago a girl with wings fought to save the world. But then she disappeared.

Now she's just a fading legend, remembered only in stories.

Hawk doesn't know her real name. She doesn't know who her family was, or where they went. The only thing she remembers is that she was told to wait on a specific street corner, at a specific time, until her parents came back for her.

She stays under the radar to survive . . . until a destiny that's perilously close to Maximum Ride's forces her to take flight. Someone is coming for her.

But it's not a rescue mission. It's an execution.

James Patterson is the world's bestselling author. The creator of Maximum Ride and Crazy House, he has donated more than one million books to students and soldiers, as well as millions of dollars to independent bookstores and school libraries. He lives in Florida with his family.

Gabrielle Charbonnet is the coauthor of Sundays at Tiffany's, Witch & Wizard, and Crazy House with James Patterson, and has written many other books for young readers. She lives in South Carolina with her husband and a lot of pets.
Raves for the blockbuster MAXIMUM RIDE series:
#1 New York Times Bestseller
Publishers Weekly Bestseller
An ALA Quick Pick for Young Adults
An ALA/VOYA "Teens' Top Ten" Pick
A VOYA Review Editor's Choice
A New York Public Library "Books for the Teen Age" Selection
A Book Sense Summer Children's Pick
A KLIATT Editors' Choice
A Children's Choice Book Awards Author of the Year for MAX

"Expect Patterson's return to the Maximum Ride universe to soar to even greater heights than before." --- Booklist