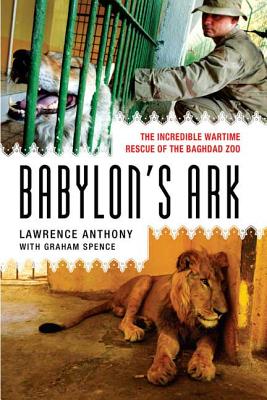 The astonishing story of the soldiers, conservationists, and ordinary Iraqis who united to save the animals of the Baghdad Zoo

When the Iraq war began, conservationist Lawrence Anthony could think of only one thing: the fate of the Baghdad Zoo, caught in the crossfire at the heart of the city. Once Anthony entered Iraq he discovered that hostilities and uncontrolled looting had devastated the zoo and its animals. Working with members of the zoo staff and a few compassionate U.S. soldiers, he defended the zoo, bartered for food on war-torn streets, and scoured bombed palaces for desperately needed supplies.

Babylon's Ark chronicles Anthony's hair-raising efforts to save a pride of Saddam's lions, close a deplorable black-market zoo, run ostriches through shoot-to-kill checkpoints, and rescue the dictator's personal herd of Thoroughbred Arabian horses. A tale of the selfless courage and humanity of a few men and women living dangerously for all the right reasons, Babylon's Ark is an inspiring and uplifting true-life adventure of individuals on both sides working together for the sake of magnificent wildlife caught in a war zone.

Lawrence Anthony (1950-2012) founded the Thula Thula wildlife reserve in Zululand, South Africa; launched The Lawrence Anthony Foundation; and received the UN's Earth Day award for his efforts to save the animals of the Baghdad Zoo. With Graham Spence, he is the author of Babylon's Ark: The Incredible Wartime Rescue of the Baghdad Zoo, The Elephant Whisperer: My Life with the Herd in the African Wild, and The Last Rhinos: My Battle to Save One of the World's Greatest Creatures.

GRAHAM SPENCE is a journalist and editor. Originally from South Africa, he lives in England. Together he and Lawrence Anthony wrote Babylon's Ark: the Incredible Wartime Rescue of the Baghdad Zoo.

“A wartime story with a joyful ending.” —Kirkus Reviews (starred)

“[Anthony] should be lauded for his initiative, generosity, and doggedness in getting the zoo back on its feet with very little outside support.” —San Francisco Chronicle

“The rare Iraq war book that could conceivably be called uplifting.” —Entertainment Weekly

“Anthony deserves tremendous credit for his fearlessness and perseverance in rescuing countless animals against all odds.” —The Explorers Journal