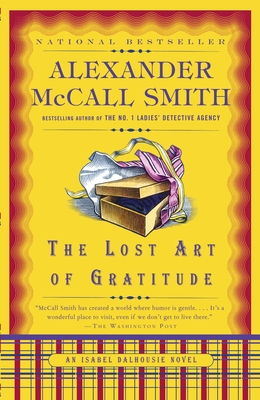 This is book number 6 in the Isabel Dalhousie Series series.

Nothing captures the charm of Edinburgh like the bestselling Isabel Dalhousie series of novels featuring the insatiably curious philosopher and woman detective.  Whether investigating a case or a problem of philosophy, the indefatigable Isabel Dalhousie, one of fiction’s most richly developed amateur detectives, is always ready to pursue the answers to all of life’s questions, large and small.

The sensational sixth installment in the best-selling chronicles of the irrepressibly curious Isabel Dalhousie finds our inquisitive heroine and new mother racing two very troublesome people from her past.

Isabel’s son, Charlie, is only eighteen months, but his social life is already kicking into high gear, and it's at a birthday party, where Isabel is approached by Minty Auchterlonie, an old adversary and now a high-flying financier. Minty, it seems, is having trouble in her personal life, and seeks Isabel's help. To make matters worse, the anything but peaceable Professor Dove has accused Isabel's journal of plagiarism.  There is also the ever-pressing question of the future of her relationship with Jamie. As always, she makes her way toward the heart of each problem by philosophizing, sleuthing, and downright snooping as only she can.

ALEXANDER MCCALL SMITH is the author of the international phenomenon The No. 1 Ladies’ Detective Agency series, the Isabel Dalhousie series, the Portuguese Irregular Verbs series, and the 44 Scottland Street series. He is professor emeritus of medical law at the University of Edinburgh in Scotland and has served on many national and international bodies concerned with bioethics.

"The best of the Dalhousie tales so far." --The New York Examiner

"McCall Smith has created a world where humor is gentle. . . . It's a wonderful place to visit, even if we don't get to live there." --The Washington Post

"Wondrous. . . . Can McCall Smith do no wrong?" --Richmond Times-Dispatch

"CHarmingly told. . . . Its graceful prose shines, and Isabel's interior monologues--meditations on a variety of moral questions--are bemused, intelligent and entertaining." --The Seattle Times

"Full of his insightful but gentle examinations of human nature. . . . Paints [a] rich portrait of Edinburgh." --Rocky Mountain News

"Habit-forming. . . . Leaves plenty of time for pondering mroal conundrums, the drinking of steaming cups of hot brew (coffee, in this case) and . . . gentle probing into the human condition." --The Oregonian

"Whimsical. . . . [A Memorable cast of characters. . . . McCall Smith's assessments of fellow humans are piercing and profound. . . . [His] depictions of Edinburgh are vivid and seamless. . . . His fans . . . are sure to embrace these moral peregrinations among the plaid." --San Francisco Chronicle