Under the Red White and Blue: Patriotism, Disenchantment and the Stubborn Myth of the Great Gatsby (Paperback) 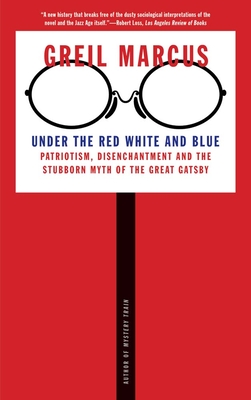 Under the Red White and Blue: Patriotism, Disenchantment and the Stubborn Myth of the Great Gatsby (Paperback)


Not Currently On Our Shelves. Usually Ships in 1-5 Days.
An "astute, challenging, and far-reaching” look (Kirkus Reviews, starred) at how F. Scott Fitzgerald’s vision of the American Dream has been understood, portrayed, distorted, misused, and kept alive

“I found great pleasure in . . . Under the Red White and Blue . . . about the idea of the American dream, its allure, the exploitation of it.” —Percival Everett, New York Times Book Review, “By The Book” section

Renowned critic Greil Marcus takes on the fascinating legacy of F. Scott Fitzgerald’s The Great Gatsby. An enthralling parable (or a cheap metaphor) of the American Dream as a beckoning finger toward a con game, a kind of virus infecting artists of all sorts over nearly a century, Fitzgerald’s story has become a key to American culture and American life itself.

Marcus follows the arc of The Great Gatsby from 1925 into the ways it has insinuated itself into works by writers such as Philip Roth and Raymond Chandler; found echoes in the work of performers from Jelly Roll Morton to Lana Del Rey; and continued to rewrite both its own story and that of the country at large in the hands of dramatists and filmmakers from the 1920s to John Collins’s 2006 Gatz and Baz Luhrmann’s critically reviled (here celebrated) 2013 movie version—the fourth, so far.
Greil Marcus has written many books including Mystery Train,Lipstick Traces, and The History of Rock ’n’ Roll in Ten Songs. With Werner Sollors he is the editor of A New Literary History of America. He lives in Oakland, CA.
“I found great pleasure in Greil Marcus’s Under the Red White and Blue: Patriotism, Disenchantment and the Stubborn Myth of the Great Gatsby, about the idea of the American dream, its allure, the exploitation of it.” —Percival Everett, New York Times Book Review, “By The Book” section

“Deep learning and distinctive prose . . . a welcome addition to the study of modern US culture by one of our most incisive and original critics.”—David Alworth, American Literary History

“Greil Marcus is one of our greatest living cultural critics. Not only is this a wildly original essay on one of America’s most revered novels—it’s also a fitting capstone to his oeuvre.”—James Miller

“Now more than ever, we need to think long and hard about our collective national fantasies. There's no one better suited to this task than Greil Marcus.”—David Treuer, author of The Heartbeat of Wounded Knee

“With history, with narrative flourish, and with thoughtfully woven connective tissue, Greil Marcus takes The Great Gatsby and gives it a newer, richer life well beyond the one it has already lived.”—Hanif Abdurraqib, author of Go Ahead in The Rain: Notes to A Tribe Called Quest

“Greil Marcus’s prose has an electric wondering urgency; the artworks under description crackle and glow, illuminating whole landscapes of history and culture. This method has never found a better home than Gatsby. The result kept me up all night.”—Jonathan Lethem, author of The Ecstasy of Influence

“Under the Red White and Blue is a soaring, roaring song of a book. The pretext is The Great Gatsby, but the value comes in riding along as Marcus beats back into the past and the fate of America.”—David Thomson, author of The New Biographical Dictionary of Film