Crap: A History of Cheap Stuff in America (Paperback) 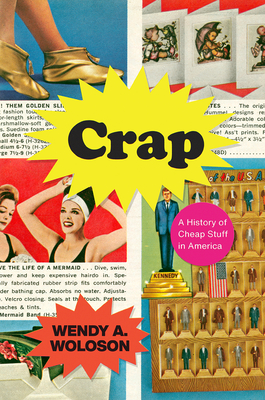 Crap: A History of Cheap Stuff in America (Paperback)

By Wendy A. Woloson


On Our Shelves Now
Crap. We all have it. Filling drawers. Overflowing bins and baskets. Proudly displayed or stuffed in boxes in basements and garages. Big and small. Metal, fabric, and a whole lot of plastic. So much crap. Abundant cheap stuff is about as American as it gets. And it turns out these seemingly unimportant consumer goods offer unique insights into ourselves—our values and our desires.

In Crap: A History of Cheap Stuff in America, Wendy A. Woloson takes seriously the history of objects that are often cynically-made and easy to dismiss: things not made to last; things we don't really need; things we often don't even really want. Woloson does not mock these ordinary, everyday possessions but seeks to understand them as a way to understand aspects of ourselves, socially, culturally, and economically: Why do we—as individuals and as a culture—possess these things? Where do they come from? Why do we want them? And what is the true cost of owning them?

Woloson tells the history of crap from the late eighteenth century up through today, exploring its many categories: gadgets, knickknacks, novelty goods, mass-produced collectibles, giftware, variety store merchandise. As Woloson shows, not all crap is crappy in the same way—bric-a-brac is crappy in a different way from, say, advertising giveaways, which are differently crappy from commemorative plates. Taking on the full brilliant and depressing array of crappy material goods, the book explores the overlooked corners of the American market and mindset, revealing the complexity of our relationship with commodity culture over time.
By studying crap rather than finely made material objects, Woloson shows us a new way to truly understand ourselves, our national character, and our collective psyche. For all its problems, and despite its disposability, our crap is us.

Wendy A. Woloson is professor of history at Rutgers University-Camden and the author, most recently, of In Hock: Pawning in America from Independence through the Great Depression, also published by the University of Chicago Press, and coeditor of the collection, Capitalism by Gaslight: Illuminating the Economy of 19th-Century America.

"Part history, part sociology, with some firecracker economic insights to boot, Crap: A History of Cheap Stuff in America arrives as a much-needed etymology for everyday goods that we take for granted. . . . Elucidating, witty, and compulsively readable."
— Lit Hub

“Woloson’s book is a history of buying ‘crap’–Magic Wand hand mixers, Beanie Babies, knock-off Staffordshire figurines, devices to measure the freshness of eggs (The Eggs Ray), hair in a can, Thighmasters, Baconizers–as well as a dossier of marketing ploys including one of the most fundamental of all: the ‘allure of infinite variety,’ or the art of heterogeny.”
— Times Literary Supplement

“Since the consumer revolution of the 1700s, an abundance of cheap goods has enabled us to buy pointless stuff; but all of this crap comes with environmental, economic and spiritual costs, explains the academic Wendy A Woloson in this rich and expansive cultural history. It asks: surrounded by all these ‘what-nots’ and ‘thingums,’ have we ourselves become crappy?”

"Admirably researched, vividly written, handsomely illustrated, and ethically passionate, Woloson’s book is both an absorbing history and entertaining diversion. Almost everyone who reads it will be (or should be) at least slightly ashamed about some of their own purchases, whether or not they accept Marx’s view of consumer society. . . . [A] landmark book."
— Milken Institute Review

"Woloson makes some compelling discoveries and connections. . . .It’s not really the products themselves that are at the heart of her book: it’s the schemes and schemers who lighten our wallets which is its true subject. They’ve figured out a million ways to take us and as many to make us feel happy to be taken. We’re covered in it but keep asking for more."
— Chicago Reader

"The objects Wendy A. Woloson holds up for inspection in her book on “the history of cheap stuff in America” could be sorted into a number of bins: knickknacks, tchotchkes, keepsakes, souvenirs, cheapjack, premiums, prizes, gimmicks, gadgets and probably a few more. A Venn diagram would show much overlap. But taken in aggregate, the most general category is the one the author, an associate professor of history at Rutgers University, uses as her title: Crap."
— Scott McLemee

"If you thought, you knew in which disguises and shapes crap was sold, often to make very little profit margins, be prepared for some surprises. The many stories, pictures and advertising ideas she reveals about peddlers, sales performances (changing over the decades), cheap chain stores and novelty goods with obviously no purpose are fascinating."
— Pop Culture Shelf

“Crap: A History of Cheap Stuff in America describes how we have learned to endure, accommodate and sometimes cherish the shortfall between our desires for slackly manufactured objects and the limited satisfactions they provide.”
— UnHerd

“Deeply researched. . . . The book is sympathetic to our impulse toward crap, if not toward crap itself or its production. . . . Crap is insightful in its analyses of the way cheap stuff has worked to appease our aspirations.”

"We are a nation of collectors, says Woloson; so she discusses plates, spoons, figurines and Beanies that were made specifically for collect-o-mania. Souvenirs are up for examination, as are other childhood tchotchkes and those too-good-to-be-true things you always just had to order from the backs of comic books. Woloson writes about goofy gag gifts; gender differences in marketing novelty items, such as joy buzzers; and she looks at the influence Chinese factories made on American trinkets. This book is as gleeful as emptying the cereal box in a Saturday morning, and finding the 'free prize' before your siblings do. It’s as special as a drink from the glass that Mom got for you at the gas station. It’s history and nostalgia rolled into one, so read Crap.”

"Woloson is the kind of history professor who makes a subject come alive. . . . In Crap, Woloson expertly combines her interest in popular Americana with her expertise in American economic history to create an interpretation of consumption in America that is as compulsive and propulsive as our consumption habits themselves."

“We’ve heard all about the magic of the marketplace, the power of capital-backed innovation to improve lives. We hear less about the astounding amount of crap that results—and that we consistently embrace. But Woloson has rightly recognized this as an important subject, and she goes deep into the surprisingly long history of America’s appetite for the cheap, shoddy, dubiously marketed, ephemeral, and sometimes outright useless stuff that’s such a familiar part of everyday life we barely think about it. The book isn’t a jeremiad, or a Marie Kondo–style advice guide, but a thoughtful and surprising examination of the flip side of our seemingly sparkling material culture. Woloson takes crap seriously and shows us why we should, too.”
— Rob Walker, author of The Art of Noticing and Buying In

“A fascinating look at the history of cheap commodities in America and the ways they have been marketed, sold, and consumed. Woloson examines gadgets, giveaways-gifts-swag, ready-made cheap collectibles, novelties/jokes, with some terrific mini case-histories of businesses such as Woolworth’s Five and Dime, Hummel figurines, and Beanie Babies. Crap elucidates the central role that cheap goods have played in American consumer culture.”
— Marita Sturken, author of Tourists of History: Memory, Kitsch, and Consumerism from Oklahoma City to Ground Zero

"Excellent, paradigm-shifting. . . supported by exhaustive research and argued with specificity, vigor, brevity, and wit."
— The Diagram

"The only observation I can make, and a fairly obvious one at that, is that the Crap Industrial Complex described throughout my book has no shame and no limits. It is also something I have really only come to truly appreciate now, since I no longer have the luxury of the historian’s knowing detachment but am myself at the vortex of the crappy trash gyre. There are always opportunities to sell more crap, even and perhaps especially to the vulnerable, the sick, and the bereaved. This, not the disease, makes me angry on my own behalf and on behalf of the collective of Sick People."
— Boston Review

"Crap: A History of Cheap Stuff in America is both a meticulously researched and surprisingly capacious book."
— Winterthur Portfolio