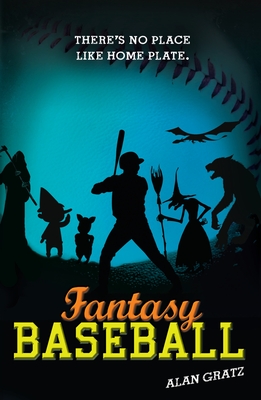 “The title says it all. Gratz takes his readers on a rip-roaring, nail-biting, winner-take-all ride through baseball games filled with classic characters from favorite children's books. This one will make you recall all of those books you loved as a kid.”
— David Richardson, The Blue Marble, Fort Thomas, KY

Alex Metcalf must be dreaming. What else would explain why he's playing baseball for the Oz Cyclones, with Dorothy as his captain, in the Ever After Baseball Tournament? But Alex isn't dreaming; he's just from the real world. And winning the tournament might be his only chance to get back there, because the champions get a wish granted by the Wizard. Too bad Ever After's most notorious criminal, the Big Bad Wolf, is also after the wishes. And anyone who gets in his way gets eaten!

From beloved baseball author Alan Gratz comes a novel in which classic literary characters are baseball crazy, and one real-world boy must face his fears and discover the surprising truth about himself.
Alan Gratz was born and raised in Knoxville, Tennessee. After a carefree but humid childhood, he attended the University of Tennessee, where he earned a College Scholars degree with a specialization in creative writing and later a Master's degree in English education. In addition to writing plays, magazine articles, and a few episodes of A&E's City Confidential, Alan has taught catapult building to middle schoolers, written more than 6,000 radio commercials, and lectured as a Czech university. Currently, Alan lives with his wife Wendi and daughter Jo in the high country of western North Carolina, where he enjoys reading, eating pizza, and, perhaps not too surprisingly, watching baseball.