The Trackers: A Novel (Hardcover) 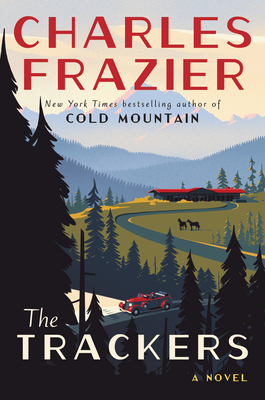 The Trackers: A Novel (Hardcover)

From the New York Times bestselling author of Cold Mountain and Varina, a stunning new novel that paints a vivid portrait of life in the Great Depression

Hurtling past the downtrodden communities of Depression-era America, painter Val Welch travels westward to the rural town of Dawes, Wyoming. Through a stroke of luck, he’s landed a New Deal assignment to create a mural representing the region for their new Post Office.

A wealthy art lover named John Long and his wife Eve have agreed to host Val at their sprawling ranch. Rumors and intrigue surround the couple: Eve left behind an itinerant life riding the rails and singing in a western swing band. Long holds shady political aspirations, but was once a WWI sniper—and his right hand is a mysterious elder cowboy, a vestige of the violent old west. Val quickly finds himself entranced by their lives.

One day, Eve flees home with a valuable painting in tow, and Long recruits Val to hit the road with a mission of tracking her down. Journeying from ramshackle Hoovervilles to San Francisco nightclubs to the swamps of Florida, Val's search for Eve narrows, and he soon turns up secrets that could spark formidable changes for all of them.

In The Trackers, singular American writer Charles Frazier conjures up the lives of everyday people during an extraordinary period of history that bears uncanny resemblance to our own. With the keen perceptions of humanity and transcendent storytelling that have made him beloved for decades, Frazier has created a powerful and timeless new classic.

Charles Frazier is the author of Cold Mountain, an international bestseller that won the National Book Award and was adapted into an Academy-Award winning film by Anthony Minghella. He is also the author of the bestselling novels Thirteen Moons and Nightwoods.

“Frazier is in top form…. Period-authentic, and the writing hums with spectacular word-images…. [A] propulsive tale of individualistic characters striving to beat the odds.” — Booklist (starred review)