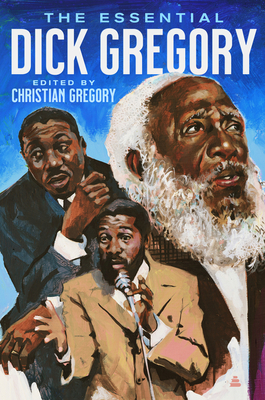 A soulful, generation-defining collection of thought-provoking, agitating, and liberating works from Dick Gregory, the activist and author of sixteen books, including the classic bestseller Nigger: An Autobiography and the 2017 NAACP Image Award Winner, Defining Moments in Black History: Reading Between the Lies.

A true renaissance man, Richard Claxton “Dick” Gregory was one of the pioneering satirists of his generation, a reformer and brilliant spokesperson for the downtrodden and forgotten who dedicated his life to speaking unadulterated truth—and to improving ordinary lives. A revered human rights and environmental activist, fearsome and uncompromising social critic, lauded bestselling author, and beloved nutrition guru, Gregory aimed not only to educate souls, but to liberate them. His words shaped a generation and remain vital for our own turbulent times, offering wisdom to enlighten and inspire a new activist age.

This carefully curated anthology of selected writings reflects and celebrates Dick Gregory’s wisdom and his vision. Divided into three sections—Body, Mind, and Spirit—it includes previously unavailable transcriptions and excerpts taken from his sixteen books, fifteen albums and audio compilations, and more than 1,200 hours of archival video, including lectures, interviews, and comedic performances. It is a breathtaking tour through the life of one of America’s most prophetic and relevant cultural icons. The Essential Dick Gregory is a pointillistic portrait of a man who gave up a lucrative entertainment career to fight injustice on the front line of battle—leading protests and hunger strikes to end the Vietnam War and apartheid in South Africa; supporting civil rights, feminism, and Native Americans,; and addressing hunger, poverty, and police brutality.

This compelling volume will challenge your beliefs, allow you to see life in unexpected ways, and dare you to make the world a better place.

Richard “Dick” Claxton Gregory was an African American comedian, civil rights activist, and cultural icon who first performed in public in the 1950s. He was on Comedy Central’s list of “100 Greatest Stand-Ups” and was the author of fourteen books, most notably the bestselling classic Nigger: An Autobiography. A hilariously authentic wisecracker and passionate fighter for justice, Gregory is considered one of the most prized comedians of our time. He and his beloved wife, Lil, have ten kids.

"[A] standout anthology... Sharp, funny, and often inspiring, this is a must-read for Gregory’s fans, and a perfect entry point for the uninitiated." — Publishers Weekly