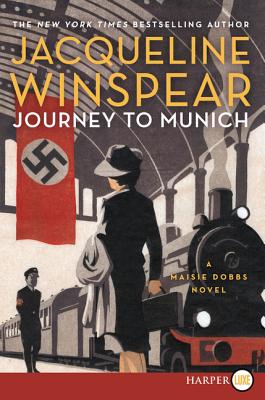 This is book number 12 in the Maisie Dobbs series.

Working with the British Secret Service on an undercover mission, Maisie Dobbs is sent to Hitler’s Germany in this thrilling tale of danger and intrigue—the twelfth novel in Jacqueline Winspear’s New York Times bestselling “series that seems to get better with each entry” (Wall Street Journal).

It’s early 1938, and Maisie Dobbs is back in England. On a fine yet chilly morning, as she walks towards Fitzroy Square—a place of many memories—she is intercepted by Brian Huntley and Robert MacFarlane of the Secret Service. The German government has agreed to release a British subject from prison, but only if he is handed over to a family member. Because the man’s wife is bedridden and his daughter has been killed in an accident, the Secret Service wants Maisie—who bears a striking resemblance to the daughter—to retrieve the man from Dachau, on the outskirts of Munich.

The British government is not alone in its interest in Maisie’s travel plans. Her nemesis—the man she holds responsible for her husband’s death—has learned of her journey, and is also desperate for her help.

Traveling into the heart of Nazi Germany, Maisie encounters unexpected dangers—and finds herself questioning whether it’s time to return to the work she loved. But the Secret Service may have other ideas. . . .

Jacqueline Winspear is the author of the New York Times bestsellers The Consequences of Fear, The American Agent, and To Die but Once, as well as thirteen other bestselling Maisie Dobbs novels and The Care and Management of Lies, a Dayton Literary Peace Prize finalist. Jacqueline has also published two nonfiction books, What Would Maisie Do? and a memoir, This Time Next Year We’ll Be Laughing. Originally from the United Kingdom, she divides her time between California and the Pacific Northwest.

“In Winspear’s skilled hands, the storyline shimmers with intelligence, the Third Reich setting simmers with evil, and the author’s silken prose sweeps the reader from page to page. But towering above all the novel’s assets is Maisie herself…. ‘Journey to Munich’ soars with class and courage, heart and humanity.” — Richmond Times-Dispatch

“Paints a keen picture of a woman and a country struggling to remain calm in the face of sweeping changes.... Deftly blending historical detail with taut suspense and her usual thoughtful exploration of Maisie’s inner life, Winspear turns in another satisfying entry in her beloved series.” — Shelf Awareness

“Taut, tense, beautifully written.… What you may not expect is the inventiveness of Winspear’s twists, the on-edge excitement they provoke, or the philosophical issues and psychological depths they all allow her to explore.” — Robert Bianco, USA Today

“Elegantly balances Maisie’s emotional turmoil and dogged patriotism with the growing tensions of a Europe on the brink of war.” — Kirkus

“A detective series to savor.” — Time

“For readers yearning for the calm and insightful intelligence of a main character like P.D. James’s Cordelia Gray, Maisie Dobbs is spot on.” — Boston Globe