Being Written: A Novel (Paperback) 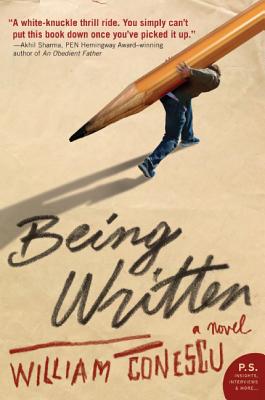 Being Written: A Novel (Paperback)

Daniel Fischer has a secret. He knows he's a character in a book that's being written. He's the only one who knows, the only one who's aware of the author's presence—but what good does it do Daniel? He's just a minor character. The author seems much more interested in other people's lives. Now Daniel is determined to win a bigger part, and he'll do whatever it takes to get the author's attention and make this story his own.

Suspenseful, subversive, and hilarious, Being Written is an audaciously inventive literary turn that gleefully calls into question who we trust, what we believe, and how the stories of our lives are created.

William Conescu's short stories have appeared in The Gettysburg Review, New Letters, Green Mountains Review, and other publications. He lives in Chapel Hill, North Carolina. Being Written is his first novel.

“[A] promising foray into metafiction...Conescu’s light, swift and nicely structured dark comedy puts to the test a character’s ability to outwrite his own author. In the end, the author wins.” — Publishers Weekly

“BEING WRITTEN is a first novel of great charm, imagination, and wit. Conescu is a dextrous storyteller with a gift for wicked twists and a dazzlingly urbane sense of both drama and humor.” — Zachary Lazar, author of Sway

“A white-knuckle thrill ride. You simply can’t put this book down once you’ve picked it up.” — Akhil Sharma, Pen Hemingway Award winning author of An Obedient Father

“Ionesco, eat your heart out. I suppose you could argue the hero is simply nuts, but I’d rather argue that William Conescu is simply a genius!” — Wilton Barnhardt, author of Emma Who Saved My Life

“At once experimentally playful and existentially poignant, and both ultra literary and ultra readable. The novel ultimately includes both that love triangle, and a few suspenseful turns and even a surprise twist at the end. One of the most impressive and memorable debuts this year.” — Metro Magazine, NC

“This book is a mind warp, and will have you thinking even after the story is finished.” — News and Sentinel, WV

“Part thriller and part essay on the relationship of writers and the characters they create.” — Herald-Sun, NC